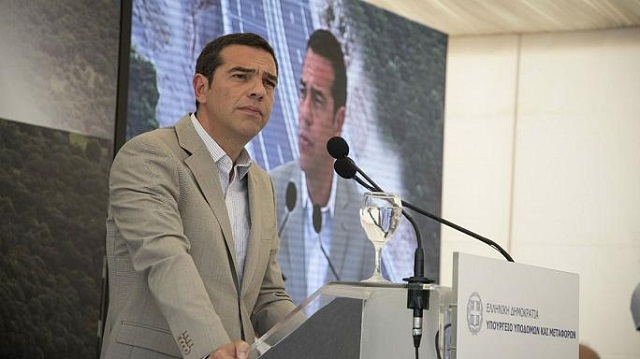 The Ionian highway is a stategic project for all Greece and Epirus and upgrades the country’s role in the wider region, Prime Minister Alexis Tsipras said on Tuesday during the inauguration of the new road. According to the prime minister, projects such as this will help usher in a new era of equitable growth, whose benefits will spread to even the weakest members of society.

Speaking at the Episkopiko services station, just before the Ionian Highway links up to the Egnatia Highway running across northern Greece, the prime minister said it would help upgrade trade, tourism and transport for all western Greece and Epirus, lifting the region out of its present isolation.
It also represented a realisation of the hopes of the region’s residents after several years, when it had seemed that the highway would never materialise.

“These works started in 2006, four governments before our own, and are finishing with us. It is, however, impossible to avoid a comparison of the efficiency, the time schedule from 2006 until 2015, for the Ionian Highway. We had the completion of 50 pct of the project in nine years and then some people just gave up; the deadlock in the talks with the contractors was such that they had to stop construction. In 2.5 years, we not only got the projects going again but also found a formula beneficial to the state’s interests and succeeded in fully adhering to the deadlines, turning a vision for all western Greece into a reality,” he said.

The benefits from the Ionian Highway will be maximized if it is included in a wider plan, which includes the construction of a new port in Igoumenitsa, a connection linking the Ionian Highway with Preveza and Agrinio and its extension to Kakavia on the Greek-Albanian border, Tsipras stated.
The Prime Minister underlined that with the Ionian Highway, the airport of Ioannina is being upgraded into a hub airport for tourists.

“The country is well on its way out of the economic crisis,” he stressed, adding that Greece is turning a page.

Our vision is a new era of equitable growth that benefits all of society and especially its weakest members, the prime minister said. The goal of exiting the current state of suffocating supervision was now “visible, attainable and realistic,” he added, and would lead to a new Greece capable of fully exploiting its potential and comparative advantages, supporting itself using its own strengths and independently planning the future of its young people with optimism, in order to keep them in the country.

Tsipras underlined the need to reorganise production, however, in order to put the economy on a firmer footing. Even though Greece was forecast to reach growth rates of 2 pct in 2017, he pointed out, similarly high growth rates in the past had not been enough to stave off the crisis of deficits, debt and lack of infrastructure.

“We do not want to return to the production model we had before the crisis – we want to return to high growth rates, but this growth must be equitable,” he said. Western Greece and Epirus were among the regions that got a raw deal in the years of prosperity, he added, and the new road would help redress that.

“This great road, the Ionian Highway, which modernises the region and brings Europe closer, both literally and metaphorically, is just part of the new road that we want to build for the future of this country,” he said, congratulating all those that were involved in turning this vision into a reality.

The prime minister will next visit Ioannina, where he will meet with city organisations and attend an event at the Silversmithing Museum. He is accompanied on the visit by Infrastructure and Transport Minister Christos Spirtzis, Administrative Reconstruction Minister Olga Gerovasili and Shipping and Island Policy Minister Panagiotis Kouroumblis. Main opposition New Democracy was represented by the party’s vice-president Kostis Hatzidakis and the Democratic Alliance by former minister Yiannis Maniatis.