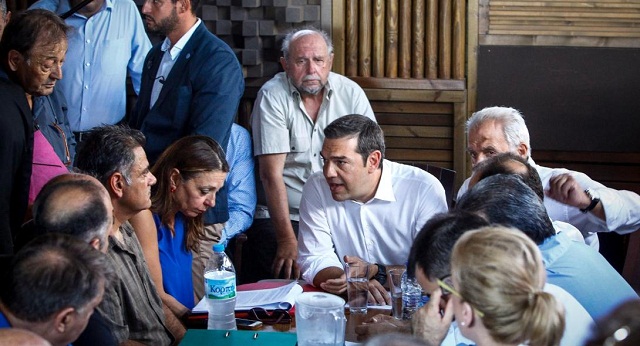 Prime Minister Alexis Tsipras paid a visit to Mati on Tuesday, where he was informed by local residents about the problems they are facing.

“I am here to bring the message that Mati will not be forgotten once the grim publicity of the first few days is done. Its rebirth is a wager. Not only to protect the residents but also to deal with chronic distortions and problems in the area,” he said.

“We are waging a battle,” he stressed and added: “I came to hear from you, the inhabitants, about your immediate needs and the goals that we need to focus upon.”

The prime minister referred to measures already taken to support the inhabitants of the fire-stricken area. He noted, among others, that demolition procedures will proceed over the coming period, as well as procedures for removing old asbestos building materials that are harmful to health. He added that, apart from repairing the damage, there must also be emphasis on good policing in the area, while residents also raised the issue of adequate street lighting.

He underlined that the goal was “to do our best to ensure normal living conditions for people permanently residing in Mati.”

Concluding his visit, Tsipras said that winning the wager of Mati’s recovery was “a moral obligation toward the dozens of people that lost their lives and those that are daily fighting the battle, in spite of their hurts,” adding that the state must be at their side.

In addition to repairing houses and restoring the natural landscape, he added, another great battle was to send a strong message to those that might seek to profit from the disaster, that Mati was not for sale.

After a discussion with local residents at a central location in Mati, the prime minister walked through the town to inspect the works underway, such as the removal of burnt trees, demolitions of condemned buildings and the collection of asbestos.