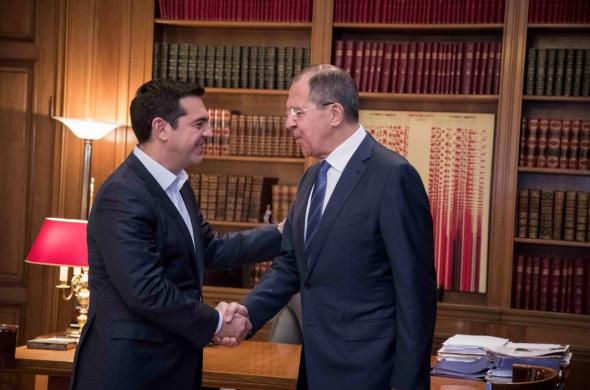 Prime Minister Alexis Tsipras in a meeting with Russian Foreign Minister Sergey Lavrov on Wednesday underlined that his visit marks the common belief in the need to maintain close cooperation and dialogue relations if we want to move in the direction of peace and stability in the region.

We also aim at the continuation of the economic cooperation in the fields of investments and tourism, Tsipras added in a message posted on Twitter.

A wide range of issues were covered during Tsipras’ meeting with Sergey Lavrov.

Tsipras and Lavrov discussed the relations between the European Union and Russia as well as the regional developments particularly regarding the eastern Mediterrenean, Syria and Ukraine.

Moreover they exchanged views on the importance of a fair, viable and comprehensive solution for Cyprus based on the UN Security Council resolutions.

The bilateral cooperation with focus on the investment and tourism sector was also touched.

Finally, the two officials referred to the Greek – Russian cultural relations with springboard the success of Greece -Russia year 2016.