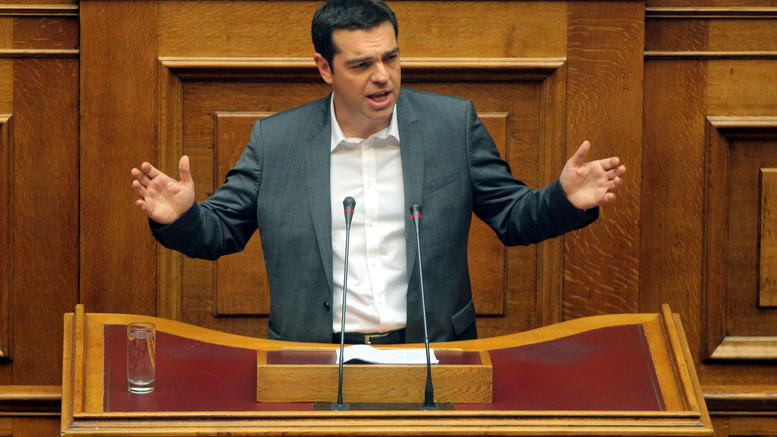 Launching an off-the-agenda debate on justice issues in Parliament on Tuesday, Prime Minister Alexis Tsipras challenged main opposition New Democracy leader Kyriakos Mitsotakis to distance himself from the “dark recent history of his party” and also announced that SYRIZA will propose a Parliamentary investigation into suspect loan agreements between banks, political parties and the media. He also raised questions concerning the allegations of intervention levelled against Alternate Justice Minister Dimitris Papangelopoulos.

The prime minister accused ND, on the pretext of a so-called revelation about a supposed government intervention in justice, of acting in close concert with some of the well-known “media of corruption” in order to create a hubbub and false impressions.

“This is not naivete but effrontery and arrogance…You did not even think that in this way, you would be opening Pandora’s box yourselves,” he said.

Tsipras specifically highlighted the “notorious Papangelopoulos intervention” – relating the minister had attempted to influence a prosecutor’s handling of an investigation into the businessman Andreas Vgenopoulos. He noted that a disciplinary inquiry was already underway concerning the handling of the specific case, which involved major financial interests, and the actions or omissions that had resulted in three separate cases files being shelved.

According to the prime minister, three questions naturally sprung to mind in connection with this affair and the minister’s involvement.

Firstly, whether the meeting for which Papangelopoulos stood accused had been requested by the minister or the public prosecutor. Secondly, why the specific case was in the hands of Appeals Prosecutor Georgia Tsatani at all and why it had been removed from the prosecutors for corruption. Lastly, why had the Supreme Court deputy prosecutor issued a document on April 22 stating that all corruption cases were the exclusive province of the corruption prosecutors, then on December 18 in the same year, the same person issued a second document saying that the Vgenopoulos cases had been rightfully removed from the corruption prosecutors.

“I ask you: is there not a very obvious legal contradiction here?” Tsipras said, noting that members of the opposition had also talked publicly of a cover-up in the specific case.

He went on to announce that SYRIZA’s Parliamentary group will table a proposal for a Parliamentary examining committee to carry out an in-depth investigation of loan agreements between banks, political parties and the media, whose final conclusions will be issued no later than the end of May.

Tsipras stressed that the issue of shady loans given to political parties could not end “overnight” because the previous ND-PASOK coalition government had slipped through an amendment pardoning and giving immunity to those responsible.

The prime minister went on to give a shopping list of 13 major instances of what he alleged were interventions in justice by previous governments, including what he called a direct intervention in the self-administration of courts by a justice minister in the government of former Greek premier Antonis Samaras, shortly before the January 2015 elections, to favour his cronies. There has always been intervention in justice, Tsipras claimed, but the “plot was entirely lost” during the three-year Samaras-Venizelos coalition government.

Omissions were also sometimes a form of intervention, he added, with the most flagrant being the failure to hand over the Lagarde list evidence to the appropriate authorities, while he also spoke of a cover-up in the Siemens’ kickbacks case and slammed the out-of-court settlement with the company as “unacceptable”. He announced that the government will set up a committee of experts and political staff to renegotiate this settlement, calling on the opposition to participate.

Tsipras also repeated that the next constitutional revision “must put a final end to the shame that is the law on ministerial responsibility. Ministers must be treated as any other citizen.”

Referring to the recent case involving former Samaras aide Stavros Papastavrou, the lawyer who paid a 3.3-million-euro fine to avoid criminal charges for undeclared deposits of 5.4 million dollars in Switzerland, Tsipras this was a resounding example of the decadence of the old political system. He asked main opposition ND leader Kyriakos Mitsotakis to explain why he was “covering for” the former premier and Papastavros and why he did not distance himself from the “dark recent past of his party,” and also called on him to explain the revelations of possible ND links with a ring of corrupt journalists.