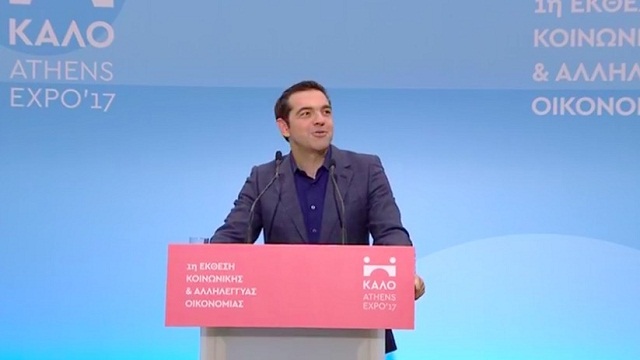 Prime Minister Alexis Tsipras stressed on Wednesday the importance of promoting social and solidarity economy as a means of strengthening the Greek economy, during a speech at the opening of the 1st Exhibition of Social and Solidarity Economy in Technopolis, in Gazi.

“We know very well, by looking at the examples of advanced economies that boosting this sector of the economy can bring multiple benefits and win a significant share of the total production,” he said.

The economic ecosystem created by the social and solidarity economy offers stability, durability and high resistance to external shocks, he explained, adding that the government is interested in economic models that generate profit for the general good.

“Our aim is for solidarity economy to reach 10 percent of the total economic activity […] We believe in collectiveness and cooperation in a business model where profit and competition will not be the only target,” he said.

The Solidarity Economy Businesses are a tangible example that things are now changing for the better in the country, the prime minister said.

Explaining why the government has taken an interest in promoting this sector of the economy, Tsipras said Greece is about to exit the crisis and should not return to the same economic model that led to the crisis.

“There was an anti-social policy, a distorted and fraudulent perception that became dominant and was massively reproduced by political, business and media circles inside and outside the country, and which was recently reiterated by SEV (Hellenic Federation of Enterprises): The notion that we ‘lived beyond our means and therefore the antidote of austerity was rightly imposed on us to bring us back on the right track,'” he said.

“It is a disparaging, if not false, reference to the possibilities of this country and its people. The issue is not to reduce the needs of society to its limited capabilities, but to service modern social needs in the best possible way.”