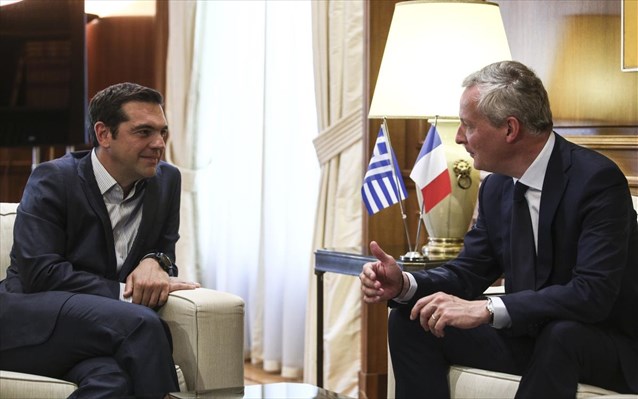 Welcoming French Economy Minister Bruno Le Maire at the Maximos Mansion on Monday, Prime Minister Alexis Tsipras said his initiative was very important and that a solution for Greece was closer than ever. Replying, Le Maire agreed that a solution “was not at all far” and that it must be found before June 15.

The Prime Minister stressed that “we are close to a solution, more than ever, a solution that will correspond to the sacrifices of the Greek people, a solution for the Greek debt, and this solution will not only be for Greece but for all Europe.”

“It is feasible to find this solution at the Eurogroup next Thursday,” he noted, during their brief dialogue before the cameras on the steps of the Maximos Mansion. Taking the matter to the European leaders’ summit would give greater chances of a solution but “dramatising” the problem would not benefit anyone, he added.

The Greek Prime Minister added that “Europe has gone through great difficulties, but has endured” and “now has to prove that it can solve its problems by itself, it can find solutions and look ahead.”
“We are at a time when Europe needs to look ahead, look at the future, and I believe that the latest developments make us more optimistic,” the prime minister underlined.

Le Maire started by relaying the friendly greetings of French President Emmanuel Macron and expressed his joy to be back in Athens, “a city that I love and know well.”

“In two days, on June 15, we have the Eurogroup meeting and I fully agree with your previous analysis that we are not at all far from a solution and that a solution must be found on June 15,” the French economy minister said.

“Now all the issue have been put on the table so we can finally find the much-desired solution. We must definitely avoid a new crisis over the Greek issue and do this calmly,” he added.

Le Maire said that meetings on this issue – between the head of the IMF, the German finance minister and the Eurogroup president – had increased manyfold in the last 10 days. “Consequently, I want to say that I am truly optimistic that we will succeed in reaching a good agreement on June 15.”

The French economy minister congratulated Tsipras on his “political courage” in pushing through difficult but necessary reforms in Greece.

“I always considered courage the foremost virtue of a politician and you surely possess this virtue. Reforms are always something difficult to implement but I am confident that the reforms passed by the Greek Parliament will benefit the Greek people and undoubtedly allow your economy to achieve the growth and prosperity that we owe it,” he said.