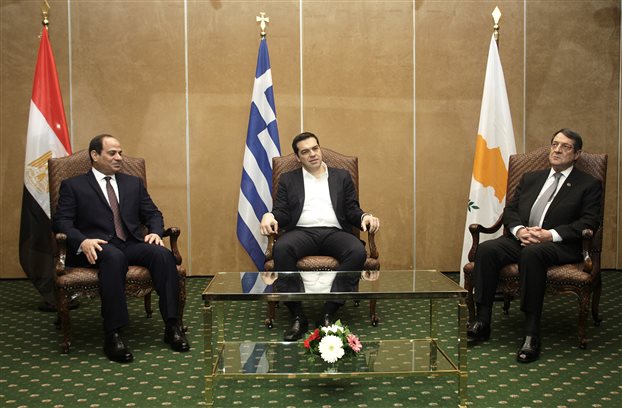 Greece, Cyprus and Egypt took steps to display their appetite for a strong trilateral partnership with the commitment of economic and political cooperation from their three heads of state.

In a joint press conference following the meeting, Tsipras noted that the three leaders held significant discussions on the energy matters that concern the region. Namely, the recently discovered Zohr oil field located about 120 miles north of the Egyptian coast, the Cypriot deposits and the potential of an energy pipeline running through Greece.

The three countries will also seek to hold discussions in hope of delineating their naval boundaries, within the prescriptions of the international law and with the goal not being to exclude other nations.

In the context of the creation of a permanent cooperation mechanism, the foreign ministries of the three countries will work together to establish a council that will further enhance ties among them. This council will be meeting regularly. A trilateral commission on naval and port partnerships will also be set up.

“All these levels of cooperation have significant importance during a time when we are gradually exiting, with confidence, from different kinds of, nonetheless profound, crises in our countries, that we are dealing with successfully and from which our people are emerging with confidence and optimism,” he said.

As Tsipras noted, Sisi invited his two counterparts for their following trilateral meeting in Cairo next year.

Sisi supported Tsipras’s comments on the creation of a cooperation mechanism. He further claimed that during his meeting with Tsipras and Anastasiades they agreed to combat terrorism and its ideological roots, noting that this is a region characterized by religious tolerance.

“The religious institutions and instruments need to deal with this issue. I thank the Greek government for the organization of a religious dialogue last October in Athens. Egypt participated in this conference on a high level because of our belief in the importance of this conference and hope to see the execution of the conference’s suggestions,” he said.

The Egyptian President also called for the reunification of Cyprus based on the United Nations’ rulings. He also argued that all three leaders agreed on the creation of an independent Palestinian state along the 1967 borders and with East Jerusalem as its capital.

On his part, Anastasiades thanked the Greek and Egyptian leader for expressing their support for the reunification of the island.

“Cyprus and Greece confirmed that we will continue to support the improvement of relations between the European Union and Egypt, especially in matters that promote peace and stability in our region, like the fight against terrorism, security, stability and the management of crises as well as of the refugee flows,” he said.

Anastasiades also identified the discovery of hydrocarbons in the East Mediterranean sea as a catalyst for stability and cooperation among the region’s countries.

“The point is not to exclude anybody because the energy sources can cover the needs of many, not just of the European but also of our neighbors,” he said.