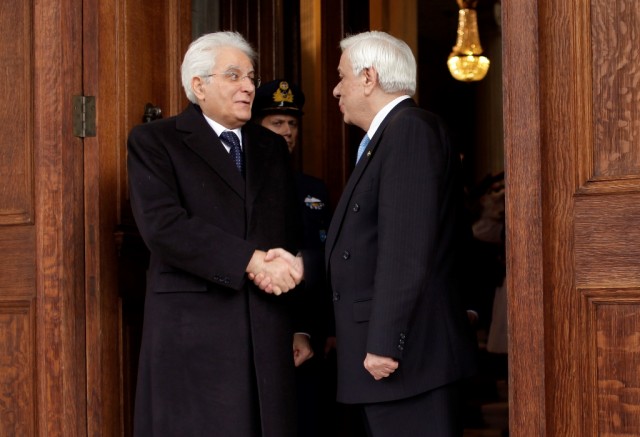 “Greece with all its political forces united will overcome the crisis and will firmly continue its course within the European Union and the hard core of the eurozone,” Greek President Prokopis Pavlopoulos on Tuesday said welcoming the President of the Italian Republic Sergio Mattarella at the Presidential mansion.

Pavlopoulos thanked the Italian President for Italy’s sincere and practical support to overcome the Greek crisis, but also for the warm hospitality during his stay in Rome in November 2015.

Pavlopoulos stressed that Greece and Italy share common ideals for the future of our European family and of European integration in general, and added that the Greek people are ready to cooperate with Italy in the issues of migration and economic crisis to jointly protect the future of the European Union and its cohesion.

“A future that is connected with the defense of Man, the Republic and the fundamental principles and values of the European culture,” said the President.

“Ancient Greece and Rome marched together to build a civilization, upon which rests the whole Western Civilization. And be sure that we will support this (Culture) together and with all our strength,” stressed the President.
On his part, Mattarella referred to the excellent bilateral relations between Greece and Italy, noting that the close cooperation between the two peoples is based on a millennial history, with shared values and a common culture.

“All these create a strong friendship and a common way of addressing international problems. A common way, which leads us to the development of common strategies,” he stressed.

He made special reference to the need for the EU to focus on economic growth and boosting employment for young people. On migration, he stressed that there is not only a problem of Greece and Italy but a problem of all Europe and the EU.

Finally, he expressed the hope, on the occasion of 60 years from the signing of the Treaty of Rome next March, that Europe will be given the opportunity to rekindle the sense of solidarity, which should govern the EU and its peoples.