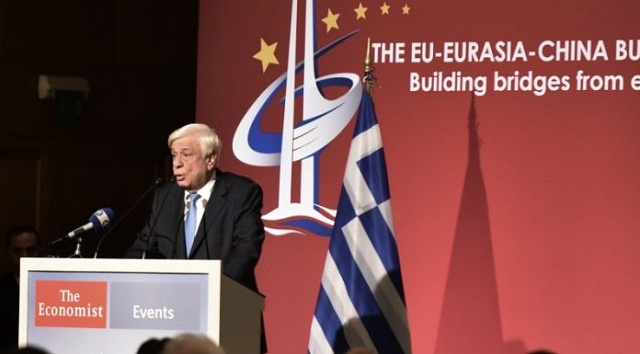 Greek President Prokopios Pavlopoulos on Monday stressed Greece’s leading role in promoting Europe’s ties with Eurasia and China, as well as the margins for an innovative approach to economic cooperation between East and West. Pavlopoulos was speaking at the Hellenic-Eurasian Business Council Conference.

“Greece supports regional integration schemes in the wider Eurasian region, which can contribute to the peace, growth and prosperity of the peoples,” he stated, adding that “it encourages and strengthens all efforts that promote a strategic link between the countries of Europe and Asia in key areas for the economy, such as energy, trade, transport, digital online collaboration, new technologies and tourism.”

He also underlined that “Greece, a European country at the crossroads of three continents, has been open throughout history to the communication and the interconnection of different countries and cultures.” Greece played a crucial role in efforts for economic cooperation between the European Union (EU) and the wider Eurasian region, as demonstrated by the fact that Greece, an EU member-state, encouraged further cooperation between the EU and China, Pavlopoulos said.

“Greece attaches great importance to China’s One Belt, One Road initiative,” Pavlopoulos noted and added: “This idea is based both on ancient Chinese philosophy and the ancient silk road, which, on the one hand is characterised by a spirit of peace and mutually beneficial cooperation and, on the other hand, makes a substantial contribution to the development of infrastructure projects, promotion of trade, economic integration and closer relations between those peoples and the societies linked, either by land or sea, to the realisation of this idea.”

The Greek President referred to the scope for an innovative approach such economic cooperation between the EU, the Eurasian Economic Union and China, pointing out that the success of the project depends to a large extent on cultivating relations of trust between the parties, which will accelerate the progress of joint investment projects for the benefit of all involved.