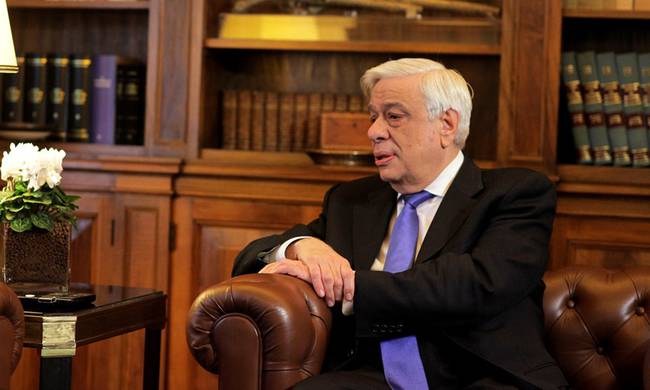 President Prokopis Pavlopoulos stressed the need for Turkey to respect its obligations deriving from its agreement with the European Union on migration, during a meeting with French Foreign Minister Jean-Marc Ayrault at the Presidential Mansion on Tuesday.

Pavlopoulos reiterated that Greece supports the constitutional rule of law in the neighbouring country, but added
that Ankara must respect its obligations.

“We do not underestimate the difficulties facing Turkey and Mr. Erdogan right now; we are ready to support the constitutional rule of law in Turkey and have done so. But Turkey must also respect its obligations, exactly because we see it as an ally who’s facing the same problems we are,” Pavlopoulos told Ayrault.

“We have stated this in all tones and I am glad, because I know that and you’ve made it clear as well.”

He also referred to the obligations of other member-states concerning the implementation of the EU-Turkey deal and condemned the phobias towards refugees.

On his side, the French official reiterated his country’s support for Greece’s efforts for economic recovery, as well as on migration and hailed the role played by the Greek President so that the country can continue in its European path.

Ayrault noted France’s continuous commitment in supporting Greece with its reforms as well as in the relocation and resettlement policies for refugees.

“I would like to hail the very brave efforts and choices of the Greek people who, in their large majority, chose to remain in Europe, to remain in the common currency; something that requires great efforts. It was a very brave and right choice. And for this reason, France did not hesitate to offer every possible help to support Greece’s efforts to recover,” he said.

“Of course, many ‘construction sites’- so to speak, if I’m allowed the term – remain in areas where work is being done, but Greece is in a very good path,” he added and expressed French President Francois Hollande’s commitment to support Greece.

He also said the European Union is not just the market but also its common values, such as solidarity, and mentioned his visit to Turkey, where he said he had the opportunity to express the EU’s solidarity towards the country, while noting the value of the rule of law.

Concerning the Cyprus issue, he expressed hope that soon “we will all be in a position to say that we all managed to solve the Cyprus issue, so that Cyprus can quickly become in its entirety a full member of the European Union.”