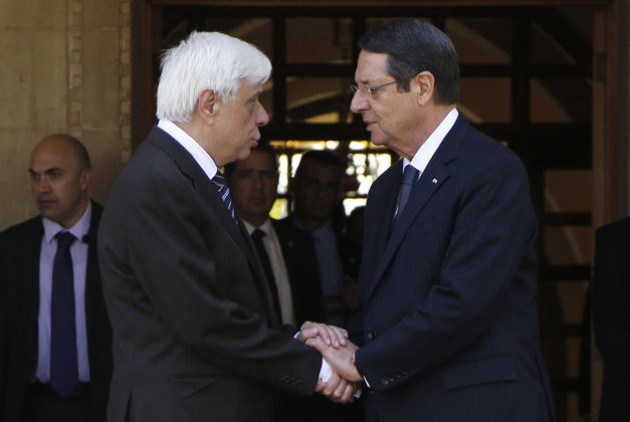 We are striving for the best possible relations with our neighbours, always with respect for international and European law, Greek President Prokopios Pavlopoulos said on Thursday during his meeting with his Cyprus counterpart Nicos Anastasiades.

Referring to the Cyprus issue, he stressed that Greece continues to seek a solution, but one that respects international law and the European acquis and has no occupation troops or guarantees.

Pavlopoulos also referred to the issue of the Exclusive Economic Zone (EEZ), which he described as extremely timely. He noted that the EEZ is delineated on the basis of international law. Some, he said, feel they are not bound by international law. However, the law of the sea is based on the Montego Bay Treaty, which is signed by most countries and produces internationally accepted rules that are binding for countries that have not signed the treaty. International law cannot be applied “a la carte,” he added.

On his part, Anastasiades stressed that “there can be no solution to the Cyprus problem with the parameters set by Turkey.”

He added that “Turkey’s insistence on guarantees and a military presence on the island prevents a solution. Turkey’s influence within the Turkish Cypriot community creates a risk of turning the country into a vehicle for foreign interests, Anastadiades noted. “We remain committed to the need to find a
solution, but within the framework of international law and the European acquis,” he said.

Anastasiades referred to the partnerships that Greece and Cyprus have promoted with countries in the region such as Israel, Egypt, Lebanon, noting that they are not against anyone and that everyone is welcome to participate, since they respect the sovereignty and the territorial integrity of all countries.
He also referred to the Euro-Arab summit in Athens, saying that the aim is to see how the problems of the region will be addressed, stressing that Cyprus, due to its position, can play a catalytic role in Europe’s relations with the Arab countries.