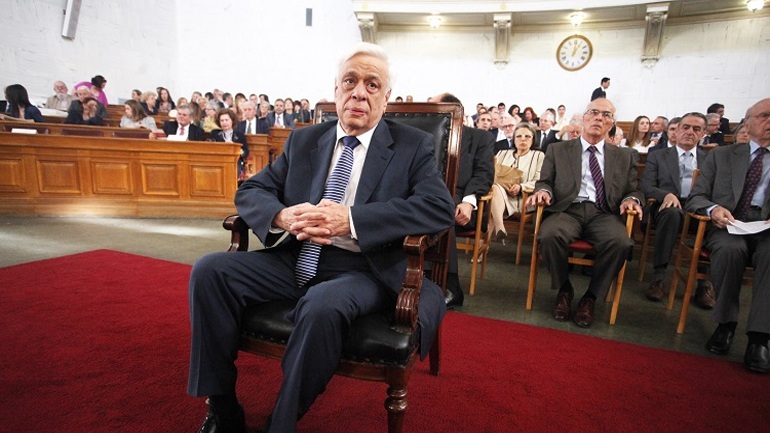 President Prokopis Pavlopoulos used the myth of the Minotaur and its labyrinth to describe the state of the international economy in a speech during a ceremony awarding him an honorary doctor of the Hebrew University of Jerusalem on Wednesday.

“European legal order is in a dangerous vortex of an unprecedented socio-economic crisis … with the economy increasingly resembling the mythic Labyrinth, in the sense that the entrance is visible but the exit is far away, labyrinthine and obscure,” Pavlopoulos, who’s on an official three-day visit to Israel said.

“In this labyrinth and against this Minotaur, legal order and the institutions assume the shape of a new Theseus, whose shield is the traditional democratic legitimacy and its spear is the full sense of his institutional mission, must fight to find the Minotaur and exterminate him,” he added. “This economic Labyrinth which has its own Minotaur, as an architect and as a relentless watchdog of nightmarish chaos, is the legitimate child of the neoliberal economic ideas.”

During a visit to the Holocaust Museum earlier in the day, Pavlopoulos said countries must not tolerate racism, anti-Semitism.

“We show zero tolerance to all forms of intolerance that affects and undermines our culture and we are bound by the promise we have given: Holocaust-Never Again,” he said.

The President laid a wreath in memory of the Jews killed in Nazi camps and noted that “the Holocaust taught us in the most painful and horrible way that the principles and values of Humanism are not, in fact, self-evident. It is our duty to be vigilant in order to protect them. Especially now that racism, intolerance and anti-Semitism are, unfortunately, again on the rise. That is why it is imperative to maintain the memory of the Holocaust and pass it over to the future generations.”

Pavlopoulos stressed that “it is a matter of national consciousness to refer, among the millions of victims, to the 67,151 Greek Jews who were killed in Nazi camps.”