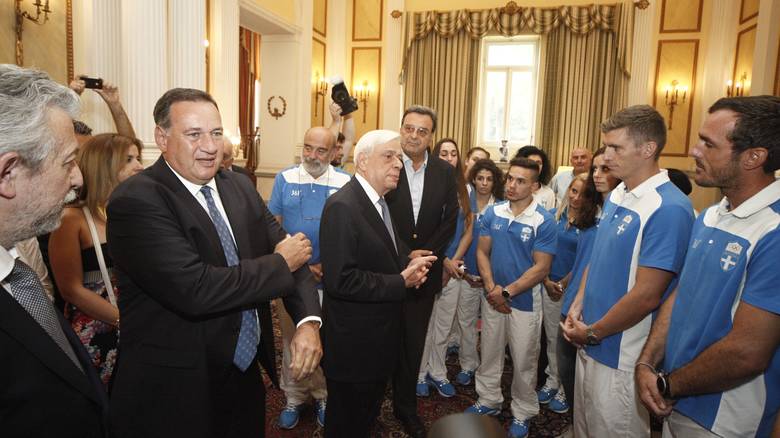 President Prokopis Pavlopoulos welcomed the athletes of the Rio Olympics on Thursday in a celebratory ceremony at the Presidential Mansion.

“You are the living expression of excellence for what you achieved. Because you achieved it with tremendous effort, that belongs almost exclusively to you, as well as your parents and your coaches, who must be proud of you. So thank you for your presence and the distinctions you achieved,” Pavlopoulos said.

He also thanked the athletes for setting a good example for the younger generation on what can be achieved with work and effort.

Meanwhile, Korakaki’s coach, Tasos Korakakis told gazzetta.gr that he felt “frustrated” by the snub that he linked to criticism of the state’s lack of support for Korakaki’s training. “I have fallen out with a lot of people recently and obviously we’re now paying the price for it,” he said.

“I really don’t want to believe that she has not been invited deliberately, but still I have some doubts. I actually found out from journalists about the tribute event last night and contacted the president of the Hellenic Olympics Committee, (Spiros) Kapralos who I don’t think is responsible, but there are no excuses.” Her father claims that the government was aware of Korakaki’s absence before the last-minute invitations had been sent. “We had told them to inform us in advance so we could plan accordingly,” said the athlete’s coach and father.

On its part, a HOC spokesman said that the decision by the government to host an event for Olympic athletes came late on Wednesday afternoon. “The state is planning another event when the whole team can be present,” said the HOC source.

Korakaki took to Facebook to explain her absence: “The time has come to set things straight and put an end to the lies and speculations made by people regarding my invitation to the presidential mansion today where Olympic winners were received by the President of the Democracy. The truth has been submitted by my family and now, by myself. The efforts of those responsible to distort the facts so as to justify their unjustifiable ‘mistake’ are sad and deceptive. The truth is that I was never invited by anyone to be there and the fact that I am on vacation abroad is not the reason I did not go as many have written. It is just a very good excuse for those who chose for me to not be there today – I don’t believe they simply forgot me – but they purposely chose this course. Prior to my return from Brazil to Greece and following the discussion with the leadership of the Hellenic Olympics Committee it was decided that the event would take place in the first days of September. In the case that the event were to have taken place earlier, we agreed that they would inform me one or two days in advance. so that I could change my tickets and be there with the rest of the athletes. It disappoints me a great deal that nobody – absolutely nobody – informed me or even asked me as had been agreed. And this is an addition to the dozens of other actions against me until today. Korakaki doesn’t exist, did not go to Rio, and her successes are ghosts and don’t exist. It isn’t the first time, after all. All I want to say for everyone to remember is that I have bled, am bleeding and will bleed to compete for our country, for Greece. To hold the flag high and give some joy to Greeks and the people who support me, believed in me and give me courage with their wishes and love and I thank them from the bottom of my heart. Nobody and nothing will put me down. That is because I belong to a tight-knit family with steel willpower, stubbornness and strength – so much so that many cannot deal with it. I have not abandoned my goals despite the difficulties, obstacles and trip-ups sent my way, and will never give up. I won’t leave my country. Whoever can’t deal with it, should leave instead.”