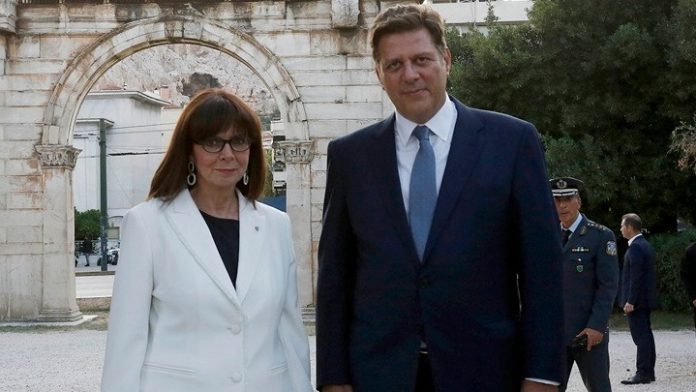 Greece’s chairmanship of the Council of Europe’s Committee of Ministers “is a unique opportunity for the country to highlight its European identity and progress and to contribute to forging our joint European progress,” President of the Hellenic Republic Katerina Sakellaropoulou said on Wednesday evening.

Speaking at the inaugural event of Greece’s chairmanship at the Temple of Olympian Zeus in Athens, Sakellaropoulou pointed out that the European Union should not respond to the coronavirus crisis financially or administratively alone, but politically. The pandemic, she said, “is a major political ordeal that accelerated Europe’s problems, both institutional and social, and highlighted the most vulnerable and fragile aspects of our symbiosis.”

The health crisis, she said, acted as a major catalyst whose repercussions cannot yet be assessed or foreseen, and pointed out that “the delay in Europe’s political integration, its democratic insufficiency, the crisis of the social state, all these were already visible long before the coronavirus.” The times urgently called for focusing on a European society of equal opportunities and integration, not one of exclusion and divisions, she underlined.

“A new Europe will rise through the pandemic crisis,” the Greek president said, and despite pessimism about Europe’s future “we all know that Europe remains a privileged place and way of life on our planet.”

The event was introduced by Alternate Foreign Minister Miltiadis Varvitsiotis, and attended by Prime Minister Kyriakos Mitsotakis with his spouse.

“There is no institution that integrates better and more fully the European spirit than the Council of Europe,” Varvitsiotis said, and spoke of the great responsibility the Greek chairmanship has in highlighting the principles and values of the Council, which he described as “the trustee par excellence of democracy, the state of law and of protection of human rights on the European continent.” The Council is a place where 47 states sharing a common European legal ground stand behind common values supporting the rights of 850 million people, he added.

He noted that Greece assumed its Council role at a critical time, when the Council’s values are under trial. “It is the first time in global history that we have decided to prioritize the protection of life and public health over economic activity,” he said, adding that “this came with the imposition of unprecedented restrictions on the freedom of people – restrictions in movement, access to work, to justice and to the exercise of democratic freedoms and rights.”

This would be the key issue for the Greek chairmanship, he said, while its target would be that these principles are adopted in the form of a Declaration of Athens, during the Summit of the Council of Europe’s Ministerial Committee on November 4 in Athens, which coincides wth the 70th anniversary of the signing of the European Convention on Human Rights.