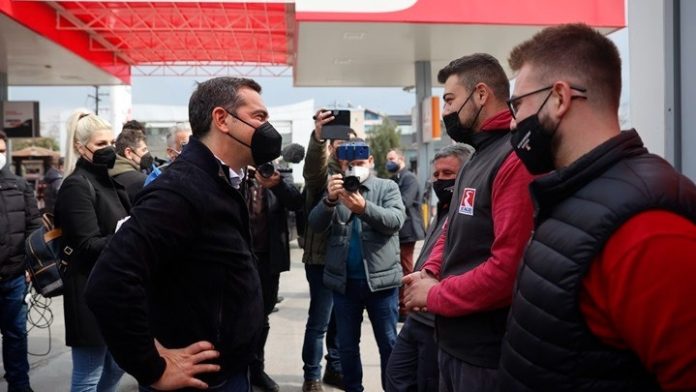 Price hikes in fuel, in energy and also in a number of raw materials “have created an explosive climate in manufacturing too,” noted SYRIZA-Progressive Alliance leader Alexis Tsipras in Thessaloniki on Thursday.

The main opposition party leader visited a petrol station where he spoke with workers alongside the president of the Panhellenic Federation of Petrol StatioSet featured imagen Traders (POPEK) and also of the Petrol Dealers Association of Thessaloniki (ENVETH) Themis Kiourtzis, and also with ENVETH vice-president Christos Stavrakis.

Kiourtzis told Tsipras that the petrol station earns about 5 cents on the litre with current petrol prices going for 2 euros per litre, which translates to a 3-5% profit overall. He was also told that the government’s fuel subsidies are “too little and only for a few.” Kiourtzis pointed out that petrol costs should have never been allowed to exceed the 2-euro per litre mark, and they discussed the need for an immediare reduction of the special tax on fuel.

Ohonos CEO Nontas Ohonos told Tsipras that “the situation regarding price hikes in raw materials and energy has gotten out of control.”

Price hikes in industry-standard oils required for the production of crisps and croissants went up by 100-150%, said Ohonos. He added that natural gas bills increased sixfold compared to May 2021, and he observed similar hikes in electricity bills. Beyond the practical financial threat, this situation also creates problems in companies’ competitiveness, he added.

Tsipras expressed his concern about the impact of this crisis on companies who cannot afford to bear the brunt of these price hikes, and which may be forced to axe jobs or even close down entirely.