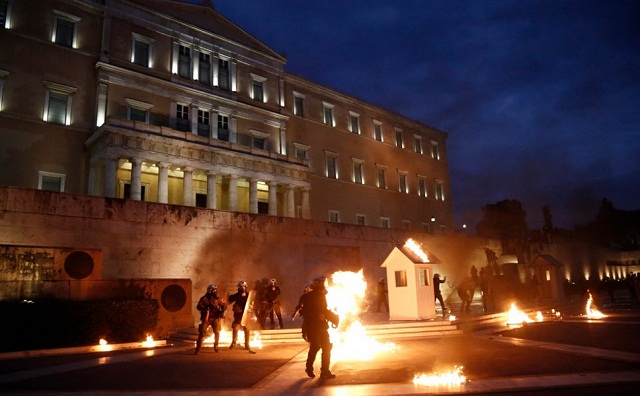 Protesters clashed with riot police outside the Greek parliament on Thursday, after a group of hooded individuals attempted to enter the courtyard throwing stones and petrol bombs. Police responded with tear gas.

One person was arrested and two were detained after the clashes.

Hooded youths attempted to climb up the stairs in front of the Monument to the Unknown Soldier on Syntagma square by throwing stones, petrol bombs and flares. Riot police responded with tear gas and stun grenades. One of the petrol bombs burned a cubicle of the Evzones guards located in front of the monument.

According to police sources who spoke to the Athens-Macedonian News Agency, the man arrested had an ax and a hammer in his possession. Clashes later continued in front of the Grande Bretagne hotel.

Numerous unions and workers’ groups held a protest march in central Athens earlier in the day to protest against the government’s new bailout deal which is being debated in parliament.