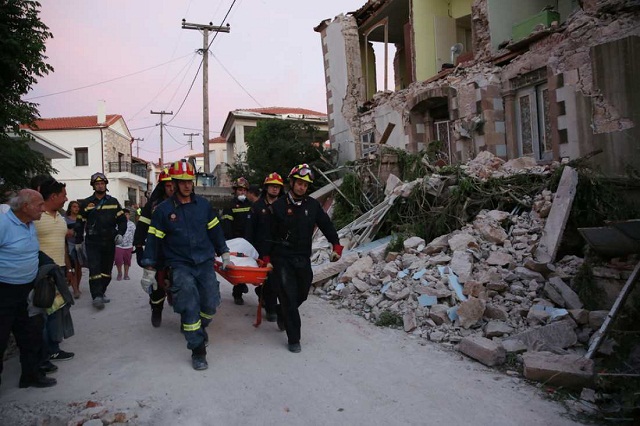 Rescue workers reached body of 45-year-old woman trapped under the rubble of a fallen house in Vrisa, Lesvos following Monday’s destructive earthquake but she was already dead, authorities reported. Fire brigade rescue crews found her body at 20:20 on Monday night. 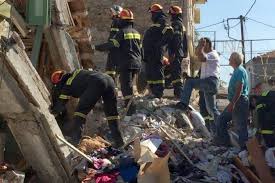 Earlier in the day, government officials had a meeting on the island and decided the measures to be taken for the next day.

A strong earthquake measuring at least 6.1 on the Richter scale shook the northeastern Aegean island of Lesvos at 15:28 on Monday, as measured by the Geodynamic Institute in Athens, or 6.3 on the Richter scale according to the European-Mediterranean Seismological Centre (EMSC). The epicentre of the quake was located in the sea 14 km south of Plomari and 34 km from Mytilene, between the island and the coast of Turkey, while it was felt as far away as Attica.

The first powerful quake was almost immediately followed by a lighter aftershock measuring 4.6 on the Richter scale at 15:35 with roughly the same epicentre, located 15km south of Plomari.

The municipality of Lesvos published a phone number and social media accounts for local residents who want to report any information or be informed about the powerful earthquake that struck the island.

The number of the old city hall’s telephone center will not operate on Tuesday due to damages on the building.

Meanwhile, the Education ministry announced that Tuesday’s university entry exams, which are currently underway nationwide, are postponed in Lesvos and Chios.

“Tomorrow there will be a new announcement after the situation has been evaluated from the competent authorities and a fuller picture of the school buildings set as examination centers in Lesvos and Chios has been formed,” the ministry said. “It goes without saying that the safety of the students competing comes first [as well as] the participation of all on equal terms,” it added. 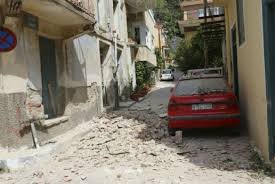 Migration Policy Minister Yiannis Mouzalas ordered the transport of 40 tents and 2,000 bottles of water from Moria’s refugee registration center tosouthern Lesvos, so they can be used by the residents of the village of Vrisa, who had to evacuate after the earthquake.

Most houses in Vrisa were destroyed and several buildings around the island suffered damages.

ALso, older industrial buildings have collapsed in Skala Polichnitou on the island of Lesvos, sources said.

Also fallen is part of a tall chimney of an industrial olive press in Skala Loutron that had been converted for use as a hotel called Zaira, whose collapse inflicted major damage to the main building.
Many buildings in the island’s main town of Mytilene suffered damage, such as falling plaster and cracks, including the historic town hall on the quay. 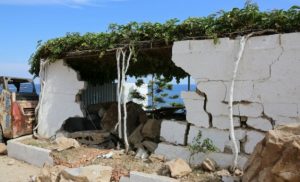 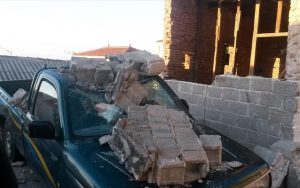 Deputy Shipping Minister Nektarios Santorinios was on his way to Lesvos on Monday night. Santorinios, who said that a team from his ministry is already on the island to make a first evaluation of the situation, will visit Vrisa to inspect the damage.

All Greek nationals in the Izmir area are safe and well following Monday’s powerful earthquake between the coast of Turkey and the Greek island of Lesvos in the northeastern Aegean, according to Greece’s General Consul in Izmir Argyro Papoulia. In a post on a social media website, the consul said that all Greeks in the consulate’s jurisdiction are unharmed, while the tremor has only property damage.

Prime Minister Alexis Tsipras his primary concern is the safety of the people who were affected by the powerful 6.1-magnitude quake.

“Our thought and concern at this hour are with the residents of the areas that were struck by the earthquake in the sea area between Chios and Lesvos. The primary need right now is the safety of citizens. The recording of the damages will be immediate and we will ensure their fastest possible restoration,” he said on his official Facebook page, ading that Alternate Citizen Protection Minister Nikos Toskas is heading to Lesvos with civil engineers and experts.

He also tweeted: “The government stands on the side of the residents of the areas affected by the earthquake in the northeastern Aegean.”

New Democracy’s shadow infrastructure minister Kostas Karamanlis will travel to Lesvos on Tuesday to inspect the situation on the island.

Party leader Kyriakos Mitsotakis said on Twitter: “Our attention is focused on the people of Lesvos who are suffering. We stand by them. A party team will go there.”