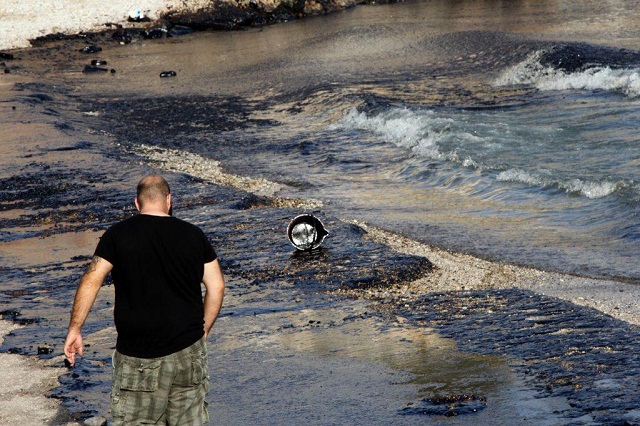 Residents of Salamina said on Tuesday they were angry about the oil spill from the small tanker than sank while being anchored off the island’s eastern coast on Sunday, which turned the sea black over a distance of 1.5 klm.

The Agia Zoni II tanker carried a cargo of 2,200 tons of fuel oil and 370 tons of marine gas oil. The coast guard rescued two crew members. It is not yet known what caused the sinking.

By Tuesday, the oil slick had been swept by the wind as far as Piraiki, a coastal suburb of Piraeus.

The smell of petroleum and tar was quite sharp in Salamina. Five large vessels of the private cleanup company were working overtime to limit the pollution. Crews used tugs, anti-pollution boats and floating cranes to prevent the leaked oil from contaminating the coast further. Many local residents volunteered to help.

“We’re doing the best we can for Salamina,” a volunteer who assisted in the cleanup operation told the Athens-Macedonian News Agency (ANA).

“The pollution will bring the island 10 years behind in terms of the ecosystem,” resident and president of the local cultural society Grigoris Argyros told ANA, adding that authorities were late to mobilize.

“Why did the mazut have to reach the coast for them to be cleaned? We will not accept any more degradation of the island,” he said, adding that residents are planning to hold protest rallies soon.
The company that has been assigned the cleanup operation managed to seal the ship’s cargo and submitted its plan to pump the remaining oil to Pireaus Port Authority for approval.

The Environmental Damage Response Office of the ministry of energy and environment send a letter to the ship owning company asking it to submit a plan on its actions so far, as well as a timetable for the measures it will take to decontaminate the coastal area and mto prevent further damage to the environment.