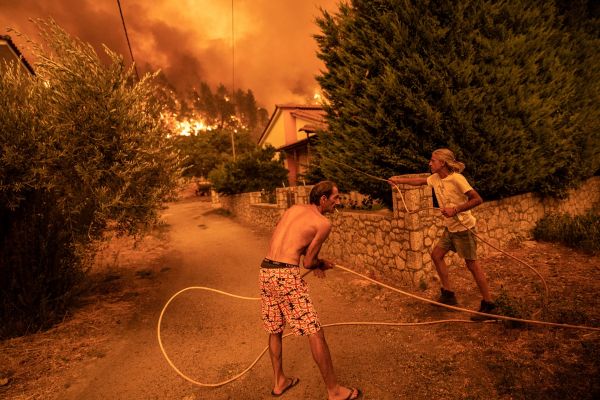 Firefighters from Greece and abroad, including volunteers and Evia residents, were trying to prevent the fire on the island from reaching towns on Monday evening.

At a large front of the wildfire, between the villages of Galatsades and Avgaria, the fire is out of control, raising fears that it will reach the resort town of Edipsos on the northwestern corner of the island, or Orei. The residents keep asking for more ground and air forces, but the strength of the fire has not diminished.

Residents from other areas of Evia have arrived to help, as people in threatened villages are trying to keep the flames out of their courtyards. “The villages are being evacuated,” Regional Director of Central Greece Fanis Spanos told Athens-Macedonian News Agency, “but staying behind are those who can help, and up to now they have offered invaluable help – without such people, a lot of villages would have been burned.”

Meanwhile, in villages where the fires has been reduced to small pockets, they flare up again, threatening the same places for a second or third time. This happened in Gouves, Kastri and Asmini.

“I want to note just this, that we need brave decisions for the day after, and we shall be uncompromising in this,” Spanos said. “There are people, families, young people who have linked their lives with the forest, its production, such as resin collectors. They have lost everything. We will stand by them so they may stand on their own feet and live to be creative,” he explained. 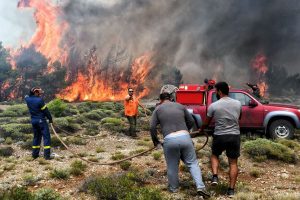 Earlier on Monday, Prime Minister Kyriakos Mitsotakis spoke by phone with the mayors of Istiea-Edipsos Yiannis Kontzias and of Mantoudi-Limni-Agia Anna, Giorgos Tsapourniotis.

He was briefed about the destruction in northern Evia, and asserted that the state will stand by everyone affected by the fires on Evia island. In addition, he said that measures to relieve the victims of the fire and to restore the region, including the natural environment.