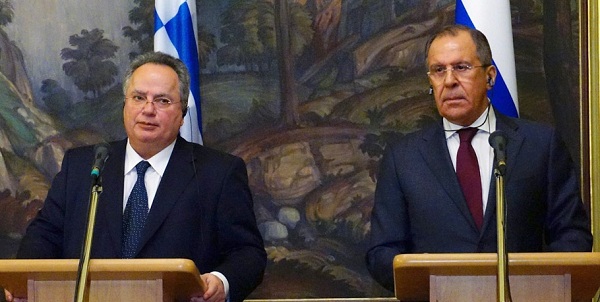 “We noted that we actively develop political dialogue… We are united in the fact that we have a significant potential to expand cooperation in the energy sector,” Lavrov said.

Russian Foreign Minister Sergey Lavrov and Greek Foreign Minister Nikos Kotzias on Wednesday expressed their mutual intention to promote deeper bilateral relations and political dialogue based on mutual trust between Greece and Russia, during a joint press conference in Athens. The two ministers had earlier signed a Consultations Programme between their respective ministries for the years 2017-2019, which they said acted as long-term confirmation of their intentions.

Kotzias and Lavrov said their discussion had covered all pending issues, while they agreed on the immediate necessity to restore calm by ending the violence in Syria, and more generally on the need for stability and security in the Middle East and North Africa. Kotzias noted that Greece promotes stability in the region through initiatives in the Mediterranean, Middle East and the Balkans.

The two men also noted their agreement on the Cyprus issue. UN resolutions must be implemented, Lavrov said, as the only settlement framework leading to a solution that is stable and acceptable to both Greek Cypriots and Turkish Cypriots. The Greek foreign minister publicly thanked Lavrov for Russia’s steadfast support of the Cyprus Republic.

Kotzias also stressed the need to keep channels open between NATO and Russia, adding that Europe’s security architecture must include Russia, not set it apart. Lavrov praised Greece’s stance with respect to Russia’s relations with the EU and NATO, noting that Athens was always in favour of dialogue and seeking solutions, rather than confrontation.

Asked to comment on recent statements made by Turkish President Recep Tayyip Erdogan regarding the “borders of Turkey’s heart” that seemed to dispute the Lausanne Treaty, the Greek minister replied that the borders of the “heart” and international law were not the same thing.

“The history of Greece’s heart reaches as far as India. But the borders of our heart are not the borders of international law. Respect for borders is obligatory,” Kotzias commented. The Greek minister noted that history “must be a school, not a prison” and treated with respect, “not with a mythology created after the fact.”

Lavrov, on his part, said that the answer to the issue was extremely simple: “In all matters, there must be respect for international law arising from international treaties.”