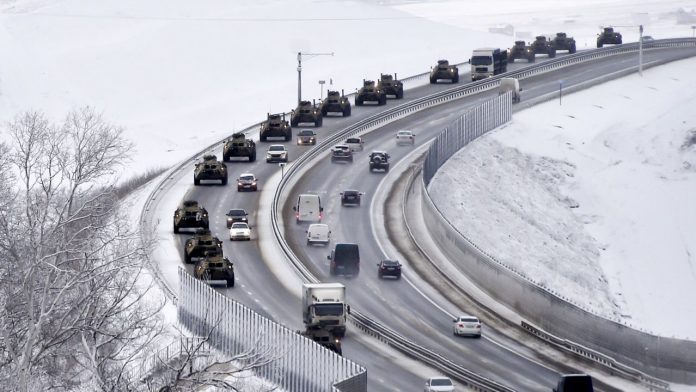 Russia is moving troops west into Belarus for war games, officials said, as the United States issued a stark warning that Putin’s troops could invade Ukraine “at any point”.

“So let’s be clear, our view is that this is an extremely dangerous situation, we are now at a stage where Russia could at any point launch an attack in Ukraine.”

The US Secretary of State will to travel to Ukraine this week and meet with Russian foreign minister Lavrov in Geneva as tensions rise over fears of a possible Russian invasion.

Antony Blinken will travel to Kyiv on Wednesday and meet with President Volodymyr Zelenskyy and foreign minister Dmytro Kuleba to “reinforce the United States’ commitment to Ukraine’s sovereignty and territorial integrity,” the State Department said.

Blinken will also meet with Russian foreign minister Sergey Lavrov in Geneva on Friday, a senior State Department official said, where he will “continue diplomatic discussions and urge Russia to take immediate steps to de-escalate.”

The trip follows negotiations in Europe between the US and Russia that did little to assuage mounting tensions.

Following the talks, multiple US officials warned that Russia was preparing to frame Ukraine in a false flag operation as a pretext to invade the neighbouring country. Russia has denied the US allegation.

Blinken will travel from Kyiv to Berlin on Thursday to discuss the talks with Russia and efforts to prevent an invasion of Ukraine with foreign minister Annalena Baerbock before meeting with Lavrov on Friday. He will also meet with officials from the UK and France, according to the State Department.

“The trip follows extensive diplomacy with our European Allies and partners about a united approach to address the threat Russia poses to Ukraine and our joint efforts to encourage it to choose diplomacy and de-escalation in the interests of security and stability,” the State Department said.

Russia is expecting the US to respond to a request that NATO not expand to former Soviet nations, something the US and its allies have rejected as a nonstarter.

The US and European countries have warned for weeks of a possible Russian invasion following the buildup of tens of thousands of Russian troops on Ukraine’s border.

Last week, Ukrainian government websites went down after a cyberattack that authorities blamed on hackers linked to Russia.