An event in Athens on Monday saw the first loan agreements signed for small and medium-sized enterprises (SMEs) as part of the first subsidiary fund of the Institution for Growth in Greece (IfG), the country’s investment fund, to open.

Eurobank and Piraeus Banks, which have contracted with IfG-Greek SME Finance S.A., agreed to the funding in the presence of Prime Minister Antonis Samaras, Greek ministers, the German ambassador to Athens and officials of the German state development bank Kreditanstalt für Wiederaufbau (KfW), among others.

A recent series of agreements between Greek and German banks and institutions set the terms for loans to be disbursed by IfG to a total of 200 million euros. Of these, 100 million will be provided by the Greek state (through the National Fund for Entrepreneurship and Development, ETEAN) and the rest from KfW.

The recipients of the loans include the companies Realize (technology); Delphi (dairy); ELANKO (chemicals, esp. pesticides); Ambelones Valambous (agrotourism). According to information, the agreements come to 300,000-500,000 each, with an interest rate of under 2 pct. Three loan agreements relate to working capital and one to refinancing of a loan. According to an IfG official, the first subsidiary fund’s 200 million euros will have been disbursed by the end of February 2015.

Piraeus Bank and Eurobank will receive long-term loan capital for the SMEs’ funding with recyclable credits (the loans paid back by SMEs to the banks will be disbursed to other SMEs). This will allow a total of 700 million euros to be disbursed within & years, according to estimates.

PM Antonis Samaras, addressing the meeting, said that Greece is taking a big step forward to turn a new page and acquire the right to sustainable development.

“We are promoting economic growth with deeds, not words or theories; we are clearing the way for Greek entrepreneurship,” Samaras underlined, adding that the economic growth mechanism is being reinforced by tangibly supporting the most dynamic units of the Greek economy new ways.

“The fund is a valuable breather for economic growth and a decisive support to liquidity and the development of the small and medium-sized company,” the prime minister underlined. 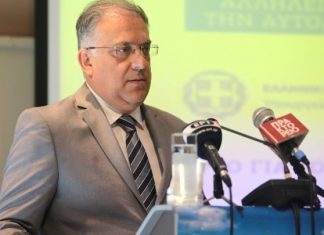 Interior Minister Takis Theodorikakos on Monday pointed out the need to adhere to the health safety measures for as long as the epidemiological data...