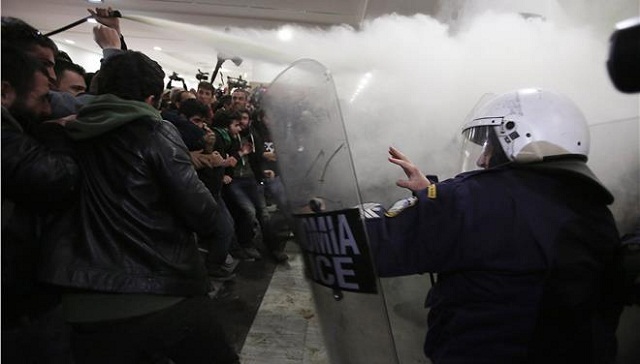 An Athens court house descended into chaos on Wednesday, the first day that online property auctions for outstanding debts resumed in Greece, after members of the “I won’t Pay” movement attempted to break into the courtroom and prevent the auctions from taking place.

MAT riot police intervened and resorted to the use of tear gas in order to remove protestors from the building. Some protestors were injured during the clashes with police.

Among those at the courthouse was the head of the Popular Union party Panagiotis Lafazanis and members of the PAME trade union faction, affiliated to the Communist Party of Greece (KKE).

According to Popular Union party sources, among those injured was a member of the party and former Kaisariani mayor Thanassis Bartzokas, who was taken to Evangelismos Hospital.