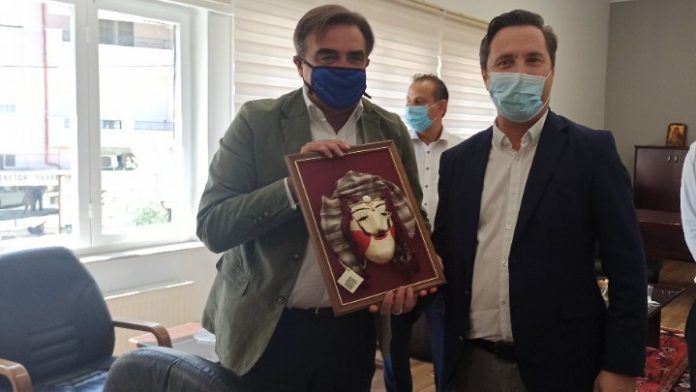 In statements during a visit to the Greek city of Naousa on Sunday, European Commission Vice President Margaritis Schinas said that unity, cohesion and solidarity between Europeans was essential for the European Union to face the many difficult
challenges that lie ahead. He was speaking on the sidelines of a meeting with Naousa Mayor Nikolas Karanikolas.

He pointed to developments in Afghanistan, the natural disasters throughout Europe and the coronavirus pandemic, noting that 2021 had been one of the most destructive summers on record.

“We are emerging from a summer that will be remembered as one of the most destructive of recent years in Europe. After the floods that left many dead in North and Central Europe, the historically high temperatures and forest fires that followed in Greece and other countries of the Mediterranean were a great ordeal for our societies and pushed national civil defence systems to their limits. At the same time, the value of the strength of solidarity between Europeans was proved in practice,” he said.

Schinas that the mobilisation of fire-fighting forces and equipment to assist Greece during the fires was one of the greatest in the history of the EU, underlining that Europeans are always united in the face of difficulty.
Regarding the crisis in Afghanistan, he said that this must “sound the time of Europe” and raised a similar challenge as regards the value of unity and common European action.

He noted that the first task was for member-states to finally agree on the new European policy for migration and asylum and the proposals for a new migration and asylum pact made in September, noting that the political hour for this decision had come. The next was to work with the United Nations and international community to build support and reception structures near the problem, reducing pressures on the EU’s external borders.

“Finally, we must support those that worked with us and defended our values that now need our help,” he added, saying that all these issues will be discussed at the EU foreign ministers’ council scheduled on Tuesday.
Schinas also appealed to everyone to get vaccinated against Covid-19 and said that Europe was now much better prepared than

last August, while the European vaccination programme was making satisfactory progress. He also noted that the European Covid certificate had saved tourism and that the national recovery and resilience plans were now past the planning stage and had entered the implementation phase.