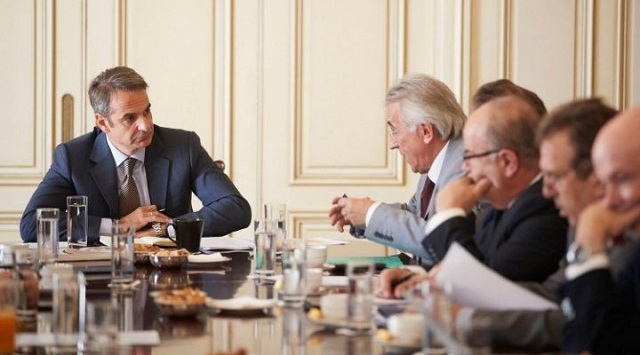 Tax cuts, the digital transformation of Greek economy and the upgrading of Greek industry’s human resources and infrastructure are some of the proposals tabled by the Vice Presidents of the Hellenic Federation of Enterprises (SEV), Spiros Theodoropoulos and Evangelos Mytilineos, during a Monday meeting with Prime Minister Kyriakos Mitsotakis at the Maximos Mansion.

Both pointed out that a revival of investments, with a particular emphasis on industry, is the most important prerequisite for the Greek economy to recover and achieve convergence with the rest of Europe.

In this regard, the target set by SEV is to increase the share of manufacturing industry to 12 pct of GDP in three years, from the current 9.5 pct, and to 15 pct in the medium term.

The SEV proposals concern the immediate mobilisation of productive investments, with the aim of accelerating investment licensing and upgrading industrial infrastructure and networks.

Concerning taxes, SEV pointed out the need to focus on reducing production and labour costs.

The digital transformation of the Greek economy, as well as the upgrading and development of human resources using modern policies and tools were also key proposals tabled at the meeting with PM Mitsotakis.

“The business community will be responsibly engaged in the process of the country’s economic revival, aiming not only at the technological and business modernisation of the productive structures of our economy, but also at reducing economic inequality and social exclusion in Greek society,” stressed SEV.

Mitsotakis emphasised the good news concerning major investments in Greece, during the meeting with representatives of the country’s largest trade union and business associations ahead of the 84th Thessaloniki International Fair (TIF).