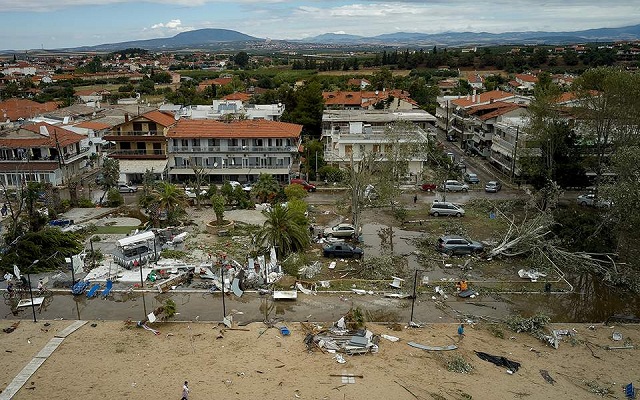 A body found by the Coast Guard off Nea Kallikratia in Chalkidiki peninsula was confirmed to be that of a fisherman, 62, who went missing during Wednesday’s storm, authorities said. The body was identified by his family. This brings the casualties from the severe storm in northern Greece to seven, with 26 being hospitalized (among them, 5 children).

An 8-year boy and a 54-year woman from Romania were killed when the roof of a restaurant they were dining fell as a result of gale-force winds, rain and hailstorms that struck in the area. Earlier, two elderly Czech tourists were killed when strong winds and water swept away their travel trailer.

Two more deaths were recorded in Nea Potidea, where a tree fell on a 39-year-old Russian and his son, about two years old, living in a hotel unit in the area.

Expressing his condolences to the families of the victims and his support to those that sustained damage or injuries from the deadly storm that struck parts of Greece, government spokesperson Stelios Petsas on Thursday noted that state services had mobilised immediately, especially in Chalkidiki.

Petsas also promised immediate action to help address the extensive damage inflicted by the storm, including compensation to farmers, and said that restoring power will be a priority.

The General Secretariat for Civil Protection had issued a warning in four languages about dangerous weather conditions on Wednesday, Petsas said during a press briefing on Thursday.

Prime Minister Kyriakos Mitsotakis was immediately informed of the disaster in Chalkidiki peninsula, and has directed that a mission of relevant ministers go in person to the area, Petsas said. The premier has also been directly briefed by the Health Minister about the victims, the government spokesman added.

Speaking of extensive power outages in the area, Petsas said the problem with the Public Power Corporation (PPC) relates to high voltage, adding that electricity will have been restored by Saturday the latest. Extraordinary and direct subsidies for infrastructure repairs will be given to the three municipalities of Chalkidiki most affected by the overnight storm, he added.

Petras pointed out that the European emergency number (112) is not working, and a special meeting with mobile phone representatives will be held on the issue on Friday and the line tested, while respective foreign embassies have been informed about the victims who were foreign nationals.

Asked if Prime Minister Kyriakos Mitsotakis plans to visit the area, the spokesman said that it is not the right time for this, but if deemed necessary within the next few days, Mitsotakis will do so.

The fire brigade got 1,182 calls for help during the deadly storm that hit northern Greece and other parts of the country, fire brigade spokesperson Vassilis Vathrakogiannis said during a briefing on Thursday.

He said that 243 fire men and 96 vehicles had responded to calls, while also expressing the fire brigade’s deep sorrow and its condolences to the families of the seven victims.

He said that fire engines were deployed throughout the area where the storm was expected to hit when the national meteorological service (EMY) issued an emergency storm warning at 15:30 on Wednesday, which had largely coincided with the places where the extreme weather phenomena occurred.

“The operations are continuing, chiefly in the Chalkidiki region, where the fire brigade has received a total of 600 calls and where a force of 87 fire brigade officers with 37 vehicles and a 21-person team on foot remains on hand,” the spokesperson said, noting that the mobilisation was now gradually being scaled back.