The survey conducted by the Business Environment Observatory in cooperation with MRB in the period April-May showed that the difficulty index on macroeconomic level facing enterprises fell to 6.8 from 7.0, while the improvement of the index on a micro-economic level was 6.1 from 6.5 last year.

“This optimism does not mean that the risks have all gone, that everything is rosy and we are heading towards a dynamic economic growth,” Theodore Fessas, SEV’s president said, presenting the survey during a news conference. “The climate has gone sour because we have entered a pre-election period and instead of focusing on reforms, focus is given on pre-election promises. This is a problem since there is no money to be shared but it needs to be produced. A 2.0 pct growth rate does not guarantee that the country can get out of the stalemate, does not boost confidence and as a result we have this picture in the stock market and banks, we do not have stability something that deteriorates when pre-election promises are given,” he said.

The main reasons for this improvement in the index and expectations are higher demand because of tourism and exports, new strategic partnerships and investments in research and development. Overall, enterprises are significantly more optimistic from the general population with a 43.7 pct of enterprises expecting the country to get out of the crisis in more than four years, compared with a 78 pct of citizens. 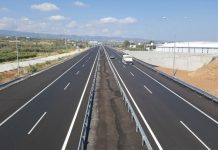