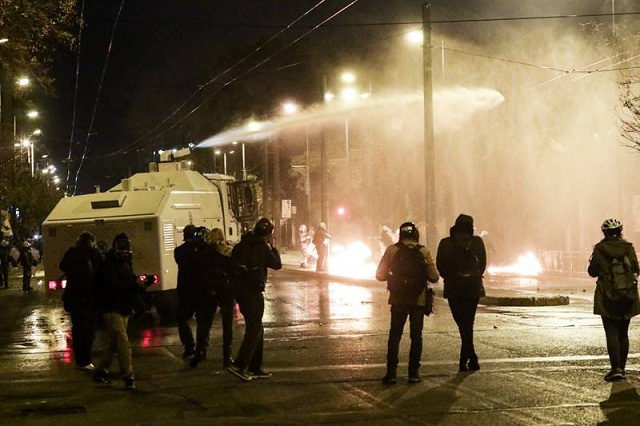 Six of the nineteen individuals arrested for the clashes at the Athens Polytechnic and the wider region of the Athens district of Exarchia on Saturday, are facing felony charges for explosion and were sent to the examining magistrate to testify.

Another seven suspects, among them minors aged 13 and 17, are charged for bodily harm and resisting arrest were released pending trial.

A total of 14 suspects were sent to the prosecutor as the other five are being hospitalised.

Fifteen of the arrested are Greeks aged 17 to 38, and four are foreign nationals (from Albania, Afghanistan, Palestine and Romania), among them two minors aged 13 and 17.

The rioting broke out around the Polytechnic building and the Exarchia district, with youths lobbing stones and fire bombs at police from the grounds of the Polytechnic and Stournari, Tositsa and Tsamadou streets. Those involved had set up roadblocks and were throwing firebombs, stones and various other objects at police.

Rioting was also reported after the annual protest march to the US Consulate in Thessaloniki, where protestors again holed up in the city’s Polytechnic, lit fires and set up roadblocks from which they attacked police with stones, firebombs and other items. Police responded with heavy use of tear gas, filling the air with smoke and choking fumes.

The 45th anniversary march in Patras similarly ended with scuffles in the city centre, during which five people were detained by the authorities.