“If the government decides to adopt an Asset Protection Scheme programme, we will support this as it is a step in the right direction,” he said.

According to Stournaras, however, it would be best if both the finance ministry’s programme and that put forward by the central bank were evaluated and presented to banks alongside other possible choices, provided that these were compatible with state subsidy rules and surveillance guidelines.

He noted that even if targets for reducing NPLs are fully met by 2021, these will still significantly exceed the European average, thus making it imperative for both Greek and European authorities to take additional action to support the banking sector and give a decisive and systematic solution to the NPLs problem. 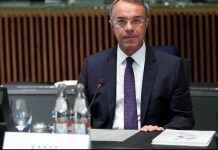