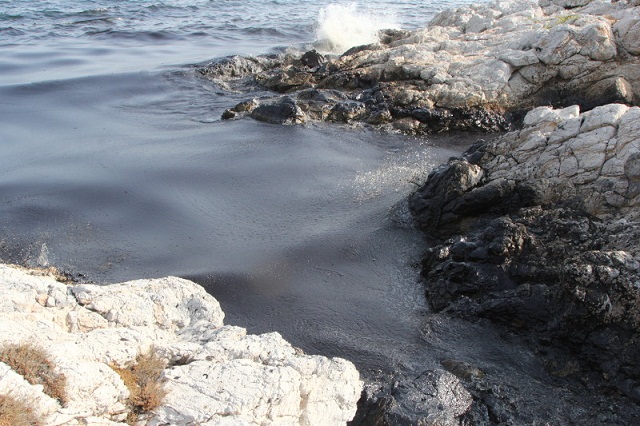 The sight of Athens’ southern coast was disheartening on Wednesday as multiple oil slicks have popped up in almost every beach from Piraeus to Glyfada, following the sinking of the small tanker “Agia Zoni II” in Salamina last Sunday, giving out a strong stench.

Freattyda, Piraiki, the beach of Paraskevas and the sea in front of the Naval Academy are the beaches polluted in Piraeus. Further down the coast, on the beaches of Aghios Kosmas, Elliniki and Glyfada, the pollution has almost reached the sun loungers.

Police has banned swimming in all the beaches placing special ribbons. According to the latest information, a private crew of 60 people is trying to remove the pollution since this morning.
The company that owns the tanker, “Agia Zoni shipping Co.”, said in a press release earlier today that the vessel has been sealed and there is no more leakage, adding that efforts are continuing to pump out the remaining fuel.

“We declare our unconditional support to the residents, businesspeople and local authorities. For our part, immediately after the sinking of the ship, which is a huge blow to us, our staff and our families, we instructed the private company that undertook the work of decontamination, to do all that is humanly and technically possible to fully clean the affected area. We have assurances that this is what will happen,” it said.

“At any case, we are and remain in continued communication with all the competent authorities to fully restore the environment,” it added.

Piraeus mayor Giannis Moralis said he was worried about the extent of the pollution. “It is essential that our coast is cleaned, but we will look for those responsible,” he said, adding that from the information he has received so far, it will take 15-20 days to clean up the sea in Piraeus, if there’s no more leakage.