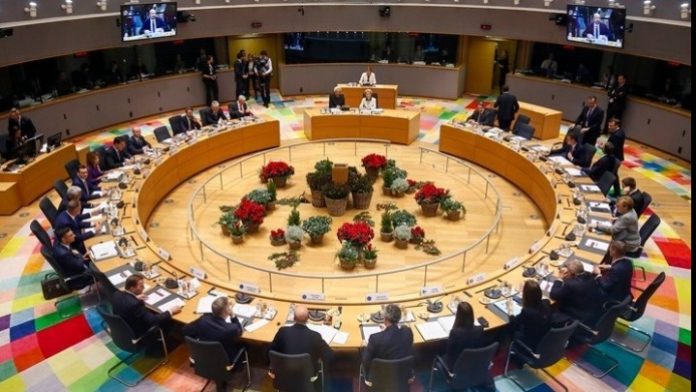 European leaders lent their support to Greece and Cyprus in the face of Turkish provocations, in the communique outlining the conclusions of the first day of the European Council. The communique released on Thursday also backed Greece’s positions on the Turkey-Libya memorandum on maritime zones, noting that this infringes on the sovereign rights of third countries and cannot produce legal consequences.
The full text of the paragraph referring to the Council’s conclusion on Turkey is as follows:

“The European Council recalls its previous conclusions on Turkey of 22 March and 20 June. It reconfirms its conclusions of 17-18 October concerning Turkey’s illegal drilling activities in Cyprus’ Exclusive Economic Zone. The Turkey-Libya Memorandum of Understanding on the delimitation of maritime jurisdictions in the Mediterranean Sea infringes upon the sovereign rights of third States, does not comply with the Law of the Sea and cannot produce any legal consequences for third States. The European Council unequivocally reaffirms its solidarity with Greece and Cyprus regarding these actions by Turkey.”

The greater part of the Council’s conclusions concern fighting climate change and the commitment to a climate-neutral EU by 2050 but “exempt” Poland at this stage, noting that “One Member State…cannot commit to implement this objective as far as it is concerned, and the European Council will come back to this in June 2020.”

Among others, it refers to the investments that will finance the transition to this goal, welcoming the European Commission’s announcement “that its forthcoming proposals will aim at facilitating 100 billion euros of investment through the Just Transition Mechanism.”