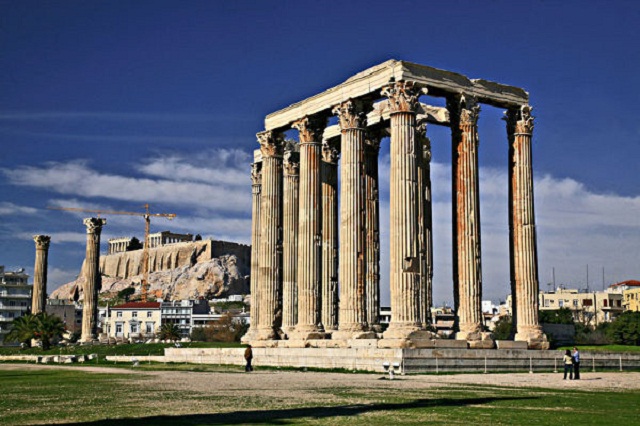 The colossal Temple of Olympian Zeus or ‘Olympeion’ in central Athens, one of the signature monuments of the Greek capital, is to undergo a complete structural repair and restoration. The go-ahead for the plans was given by Greece’s Central Archaeological Council in a recent session.

“The monument has several structural restoration problems. There had been no progress on the issue until now because it had to be inducted into some sort of National Strategic Reference Framework (NSRF) programme,” the head of the Athens Antiquities Ephorate Eleni Banou told the Athens-Macedonian News Agency on Tuesday.

The restoration had to be attempted, Banou noted, “because as I said to the CAC, if we don’t we will be answerable to history.”

There is currently extensive structural damage to the colossal monument, she pointed out, especially to the columns, which make it urgent to mount a “rescue operation” to stop the causes for its continued wear and to reinforce its structural stability. The proposed plans envisage the repair of damaged architectural elements and work to maintain the marble surfaces.

The last recorded major damage to the monument was in 1944, during the Greek civil war, where the marks of the bullets were still visible on the columns, Banou said. Prior to that, the bulk of the damage was done in the Byzantine era when most of its 104 pillars were ground down to make first-class lime or looted for use as building materials.

Currently, only 16 pillars of the massive temple still survive and were re-erected in their present form in 1835, while the last work to structurally support the monument was done in the late 1960s.

Construction of the Olympeion began in the 6th century BC during the rule of the Athenian tyrants, who envisaged building the greatest temple in the ancient world, but it was not completed until 638 years after later, by the Roman Emperor Hadrian in the 2nd century AD. During Roman times it was renowned as the largest temple in Greece.