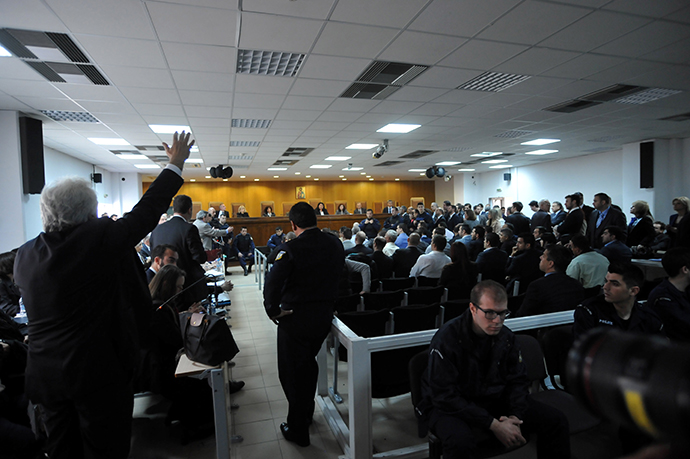 The first session for 2016 of the Golden Dawn trial that is being held at the Korydallos prison facility was carried out under tension circumstances.

During the testimony of police officer Dimitris Bagios, the mother of murdered activist Pavlos Fyssas, Magda Fyssa, came face-to-face with defendants Giorgos Patelis and Konstantinos Korkovilis outside the courtroom.

According to Mrs. Fyssa and her brother, who helped her in, the two were laughing at her and being sarcastic. Mrs. Fyssa was reportedly inconsolable and in tears, complaining that after killing her son, they “went on a holiday”. The court president temporarily suspended the trial.

The prosecution was highly critical of the witness testimonial, with Andreas Tzellis questioning whether the police and Golden Dawn had previously come to an agreement; Takis Zotos stressed that “the witness came to not testify” and Thanasis Kampagiannis underlined that “there was lack of cooperation” from the witness. The attorneys further claimed that the police was purposely late to arrive n the scene, because it believed that Golden Dawn supporters were going to attack anarchists.

The court president also decided to appoint a new attorney for Giorgos Roupakias, who admitted to murdering Fyssas, since his other lawyer has regularly showed up for the trial. The new lawyer has expressed his unwillingness to represent the neo-Nazi party member and clarified that he will only be present as a formality.