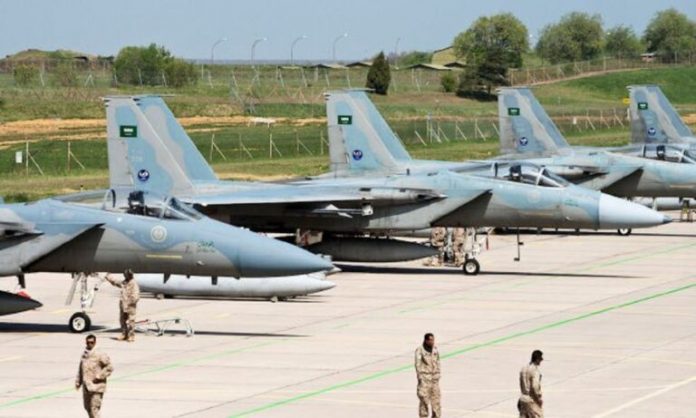 Saudi Arabia dashed Turkey’s hopes of a quick reconciliation that would overcome differences with Ankara, after Saudi F-15C fighters arrived on the island of Crete with their ground crews to participate in a training exercise with Greece in the Eastern Mediterranean, in a move that seems to have received Egyptian support.

Turkish officials expressed their shock at the Saudi decision. Turkish President Recep Tayyip Erdogan announced a few days ago that his country would discuss with the Saudi authorities their decision to hold military manoeuvres with Greece.

Turkish Foreign Minister Mevlut Cavusoglu voiced his country’s regret and unhappiness with Saudi Arabia’s participation in the military exercises with Greece. He said Ankara had not anticipated that such a military relationship would exist between Riyadh and Athens.

The arrival of Saudi fighters at Souda air base in Crete to take part in the “Ain al-Saqr 1” (“Eye of the Falcon 1”) exercise increases French-Greek-Egyptian pressures on Turkey to check its expansion in the Eastern Mediterranean.

Ankara also exerted intensive pressure on Saudi Arabia after the killing of Saudi journalist Jamal Khashoggi. Along with Qatar, it has been conspicuously involved in a hostile campaign against Riyadh.

Turkey has undertaken a wide military deployment in strategic points east, west and south of Saudi Arabia. It has established military bases in Qatar and Somalia and is reported to have sent military advisers to rebels in Yemen. Meanwhile, Turkish warships have been present in the Red Sea and the Arabian Sea.

Riyadh believes that the Eastern Mediterranean has a strategic impact on the security of northern Saudi Arabia. It also sees Turkish involvement in Somalia as a provocation to both itself and its allies.

The Saudi defence ministry said that its planes will participate with Greek forces in air sorties and joint exercises in Mediterranean skies.

The Saudi ministry published a video clip and pictures documenting the arrival of its air force jet fighters and their crews.

The ministry indicated that the “Eye of the Falcon 1” exercise aims to upgrade and develop the skills of air crews and raise the combat readiness of the Saudi air force, in addition to exchanging military experience to help plan and implement air operations.

Colonel Abdul-Rahman bin Saeed Al-Shehri, commander of the Saudi combat group participating in the exercise, indicated that it was hoped to “boost the bonds of joint cooperation between the Saudi air force and the Greek air force, exchange experiences between the two sides and raise combat readiness.”

Along with many European nations, especially Greece and France, Egypt is concerned about Turkish expansion in the Eastern Mediterranean.

Tensions in the Aegean Sea and the Eastern Mediterranean escalated between Athens and Ankara after Greece moved to include Saudi Arabia in its alliance along with France, Egypt, the United States and Israel.

Analysts believe Saudi Arabia will not be the last nation to join the alliance.

Sources told The Arab Weekly that Cairo is determined to make Turkey pay for its provocative actions in the Eastern Mediterranean and in Libya. It is seeking to form a regional cordon that curbs Ankara’s ambitions and forces it to comply with international law.

They stress that Cairo will not be deceived by the recent positive statements made by Turkish officials.

A member of the Defence and National Security Committee in the Egyptian Parliament, Major General Yahya Al-Kedwani, said that Saudi Arabia’s participation reinforces Egypt’s policy of confronting illegal Turkish interference in the Eastern Mediterranean region by strengthening cooperation and coordination ties with Greece and Cyprus.

Kadwani told The Arab Weekly, “The military exercises aim to protect economic interests in the Eastern Mediterranean, and this is something that is agreed upon among all countries with maritime border demarcation treaties. The exercises strengthen cooperation between key powers in the region and open the way for more coordination of political positions to stop Turkey’s interference. ”

He pointed out that “Saudi Arabia wields great weight in the region and it is in its interest to provide a high degree of security in the region due to the possible repercussions of tension and instability on the Gulf region, and it is important to have tight military coordination within the framework of an Arab deterrence strategy.”

A number of Turkish media outlets declared the “Ain Al-Saqr 1” manoeuvres, held with the participation of the Saudi air force, to be a direct threat to Turkey.

The Turkish press has exaggerated the scope of Saudi Arabia’s participation. Haberler newspaper said that the Saudi F-15C jet fighters would be used by Greek pilots. Experts say this is unlikely as these aircraft were never part of the Greek air force and Greek pilots would need several years of training before being able to pilot these planes.

Zaman newspaper highlighted Turkish military experts’ concerns and noted that after the United States and Japan, Saudi Arabia has the largest fleet of F-15C aircraft in the world.

It is not, however, the first time that a Gulf country has taken part in joint manoeuvres with Athens. Last August the UAE participated in a two-week exercise at Souda military base in Crete in the wake of tensions between Turkey and Greece following the deployment of Turkish oil and gas exploration ship Oruc Reis in disputed waters.

A year ago, Greek Foreign Minister Nikos Dendias announced his country had signed an agreement with Saudi Arabia to deliver, install and operate the Patriot missile system on Saudi territory to protect oil installations.

During Saudi Foreign Minister Prince Faisal bin Farhan Al Saud’s visit to Athens this February, the two countries also agreed to cooperate to enhance Riyadh’s military capabilities in the wake of the attacks on its facilities in recent months.

Saudi researcher Fawaz bin Kasib Al-Anzi described the Saudi military manoeuvres with Greece as the result of the two countries drawing together following Turkey’s interference in the Arab region and its rapprochement in recent years with countries whose interests conflict with Saudi Arabia’s.

In a statement to Russian agency Sputnik, Anzi said he considered the cooperation between Riyadh and Athens to be “normal”…”in a region rife with turmoil and crises, which explains its pursuit of an alliance with Greece considering the geographic proximity of Athens to Ankara.”

Anzi called on Saudi Arabia to form “a bloc to face up to Turkey’s moves and its interference in the internal affairs of Arab countries and its support for ideological currents that represent a threat to Arab national security, which would mean defending the kingdom’s vital interests in cooperation with countries that share Saudi Arabia’s policies.”