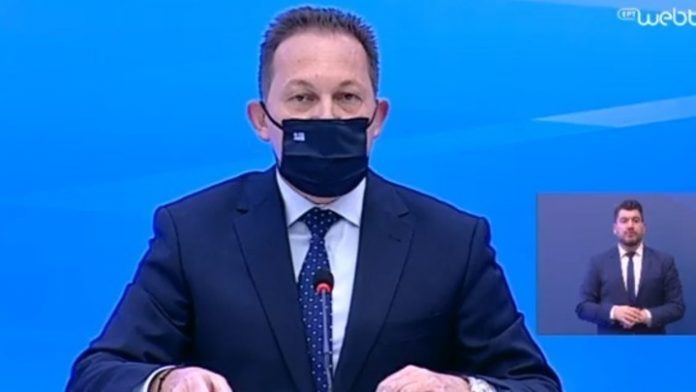 “Twice now in a short space of time, Ankara has reneged on its commitments. During his recent brief meeting with his Greek counterpart, the Turkish foreign minister had promised to propose a date for the 61st round of exploratory talks to be held in Turkey. But instead of an invitation, we had a provocation and, in fact, a double one,” government spokesperson Stelios Petsas said on Thursday during a press briefing.

“[This is] a fact that proves Turkey’s unreliability but also its contempt for the conclusions of the European Union summit on October 1-2,” he added.

“The European Council is meeting again today. Prime Minister Kyriakos Mitsotakis is already in Brussels, where both he and the President of the Republic of Cyprus, Nicos Anastasiades, will outline the latest challenges from Turkey to the leaders of the EU member states, with the opening of the Famagusta beach front and the sailing of the Uruc Reis in areas that overlap with parts of the Greek continental shelf. Especially the fact that both of these provocative moves by Ankara directly conflict with specific paragraphs of the conclusions of the recent summit,” he said.

The government spokesman stressed: “Greece remains firmly committed to the position expressed by the prime minister since the first incident involving the Turkish research vessel and is summarised in the phrase: The challenges stop, the talks begin.”

He reiterated that exploratory talks with Turkey cannot be held under a regime of threats and blackmail. “There can be no exploratory talks as long as the Oruc Reis remains within the Greek continental shelf. Turkey can not pre-empt the discussion with a research vessel in the area that we are supposed to delineate. Greece confidently insists on diplomacy and continues its efforts to strengthen its strategic alliances. Our positions are already being adopted, not only by the EU but also by the United States, which has abandoned the tactic of equal distances and has denounced Turkey for unilaterally stoking tension in the region, calling on Ankara to end this pre-planned provocation and immediately begin exploratory talks with Greece.”

He said, however, that “at the same time, Greece is doing on an operational level what it did the first time the Oruc Reis came out, what it should do. The armed forces are acting in the framework of their mission to defend the nation’s interests. They have proven many times this year that they are capable of efficiently doing their job.”

Continuing Thursday’s press briefing, government spokesperson Stelios Petsas referred to the government’s economic policy, stressing that “the budget for 2021 was drawn up in an environment of unprecedented uncertainty, globally, due to the indeterminable ending of the most serious health crisis of the last hundred years. In addition to the uncertainty associated with the coronavirus pandemic, our country is facing the – also exogenous – challenges of Greek-Turkish relations and migration flows, as well as natural disasters affecting thousands of our fellow citizens, to whom the government has already demonstrated its support.”

He underlined that: “In this unprecedented situation, the income of Greeks is projected in the basic fiscal scenario to remain almost unchanged for the two-year period 2020-2021. The government aims to overcome the crisis, with the economy and the society upright, while laying the groundwork for rapid recovery and high, sustainable, smart and inclusive growth.”