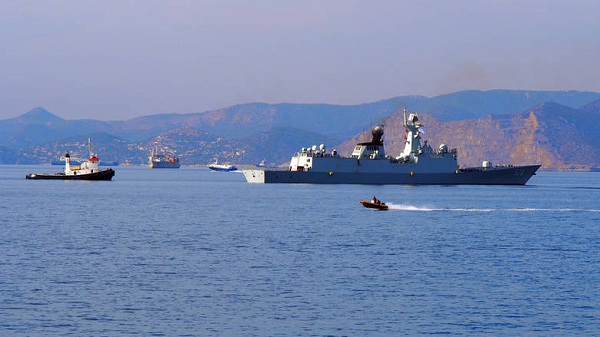 Three ships of the Chinese Navy arrived at Piraeus Port on Monday to pay a courtesy call.

They are the frigate Plans Jing Zhou (FFG-532), destroyer Plans Chang Chun (DDG-150) and the general support ship Plans Chao Hu (AOR-890), which belong to the fleet of ships promoting the Chinese initiative “Silk Road”, as described in the Belt and Road International Cooperation Summit Forum of May 2017.

Following the May forum, the three ships had arrived in Greece and docked at Piraeus from July 23 to 26. On the last day, they had held a joint training with the Greek frigate Navarino in the Saronic Gulf area. At the time, Chinese Vice Admiral Shen Hao – head of the Silk Road fleet and vice commander of the Chinese Navy’s Eastern Sea Fleet – had met for bilateral cooperation issues with Greek Navy Chief of Staff and Vice Admiral Nikolaos Tsounis. Vice Admiral Shen Hao had also paid a visit to ships at the Greek fleet’s base.