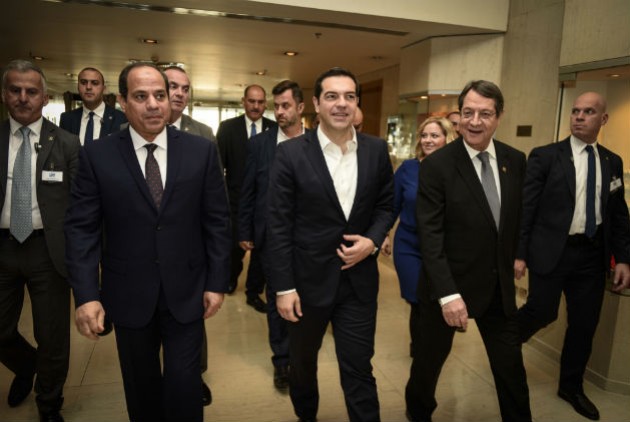 Cyprus President Nicos Anastasiades is scheduled to depart Athens for Cairo later on Monday, where he is scheduled to participate at the trilateral summit between Cyprus, Greece and Egypt on Tuesday.

On his arrival in the Egyptian capital, the President is expected to be welcomed by Egypt’s Petroleum Minister Tarek El Molla.

At the meeting, which will be the fourth among the three countries, the President will be accompanied by the Foreign Affairs Minister Ioannis Kasoulides, Energy Minister Yiorgos Lakkotrypis, Transport Minister Marios Demetriades, Agriculture Minister Nikos Kouyialis, and Government Spokesperson Nikos Christodoulides.

On Tuesday morning, Anastasiades is scheduled to have a bilateral meeting with Egyptian counterpart Abdel Fattah el-Sisi at the Presidential Palace. 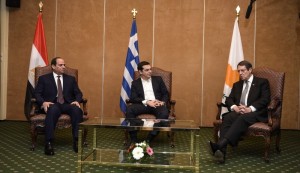 After their bilateral contacts, el-Sisi, Anastasiades and Tsipras will plant three olive trees within the Presidential Palace’s garden, as a token of the friendship and cooperation between the three countries.

Not long after that, the leaders will preside over expanded talks with their respective delegations.

Following the trilateral meeting, the leaders will make remarks to the press and a joint declaration on the meeting’s results is expected to be issued.

Afterwards, el-Sisi is scheduled to host a lunch to honour Anastasiades and Tsipras.

On Wednesday morning, Anastasiades is expected to have a new bilateral meeting with el-Sisi during which issues relating to regional developments, EU-Egypt relations, energy and economy will be discussed.

It is expected that an agreement on air transportation will be signed between the two countries following the meeting.

Among the issues to be discussed at the trilateral meeting on Tuesday are energy, regional developments, EU-Egypt relations, the Cyprus problem, agriculture, environment, air transportation, sea transportation and commerce.

Additionally, two joint declarations are expected to be signed among the three countries on environmental protection, sea transport and recreation cruises.

Anastasiades and his delegation are scheduled to return to Cyprus on Wednesday.