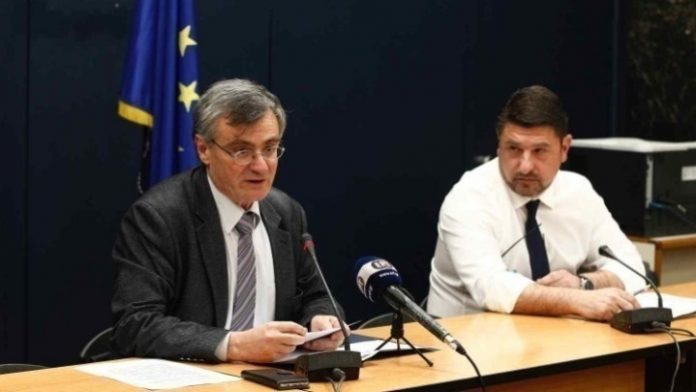 The virus that leads to the Covid-19 disease continues to mutate and adapt itself to humans, Health Ministry spokesman for the novel coronavirus Sotiris Tsiodras said on Thursday, but it is still unknown whether these mutations affect its viability.

Speaking at the daily briefing on the coronavirus pandemic in Greece, Tsiodras added the encouraging news of a one-case American study on a strain of the virus, which has shown attrition of the original genome material when the virus mutates. “Such a mutation could weaken the virus and lead to its extinction,” the infectious diseases professor speculated. Despite the single case, the study was flagged as very important by the World Health Organization (WHO) in terms of coronavirus’ future spread.

A similar mechanism of mutations, Tsiodras said, led to the exhaustion and eventual disappearance of the SARS virus, which belongs to the same coronavirus family, in 2003. He cautioned however that it is still too early “to assert this will also happen with the (new) coronavirus.”

Commenting further on the ability of the novel coronavirus to mutate so freely, and how this led epidemiologists to trace patterns of infection, he cited a London university study in which researchers identified over 200 mutations in 7,500 coronavirus-infected people. These observations he listed as follows:

– The great number of virus alterations happened in countries that were hardest hit by the virus, where the dispersion was greatest. “This means a significant global dispersion at the early stages of the disease,” and the absence of a single locus of infection. The epidemic had multiple entry points in the populations, and there were several ‘zero’ patients, or primary sources of infection.

In the United Kingdom, for example, “the variety of viruses identified was almost as great as that found in the entire world, which means that the virus entered the population multiple times independently, rather than spread through a single incidence.”

– It has been verified that the virus first rose to prominence at the end of 2019. Therefore, Tsiodras said, “it seems impossible that it circulated among people a long time before it was first identified in humans.” This, he said, provided a response to conspiracy theorists.

– It was been now confirmed that the virus will not mutate more than expected initially, “and has definitely (mutated) less than the influenza virus.”

– There is no proof the virus is becoming more aggressive or virulent; this would be a false claim.

– It has become gradually confirmed that in certain areas of the world there are very few mutations of the virus. These locations should be studied further for clues to new therapies and vaccines, he noted.
Among other questions he answered by journalists, the disease specialist said that there were encouraging news about new vaccines. One of them used samples of the virus from humans on laboratory animals, which did not exhibit Covid-19 symptoms and whose lungs were found clear of the virus.

Professor Sotiris Tsiodras also announced 15 new confirmed cases of Covid-19 in Greece in the last 24 hours and one new death.

Fatalities stand at 148 since the start of the outbreak; 40 of them were women. Of the 148, a 93.2 pct had underlying health issues and/or their average age was 70 years or more. The average age of all the deceased was 75 years of age.

Some 33 patients are being treated in Intensive Care Units with an average age of 67 years and 8 of these are women. A 97 pct of ICU patients have underlying health issues and/or are over 70 years of age.

Another 85 people have so far been discharged from ICUs.
Some 90,043 Covid-19 diagnostic tests have been carried out in Greece since the start of the outbreak.

Greece is continuing efforts to break the chain of Covid-19 infections, as the danger is still lurking, Civil Protection Deputy Minister for Crisis Management Nikos Hardalias said on Thursday, stressing the importance of avoiding a return to lockdown conditions.

He was speaking at the daily briefing on coronavirus developments in Greece, in which he was joined by Tsiodras.

Commenting on group gatherings at several squares in the Athens metropolitan area, he said that every citizen has a personal responsibility to respect other people and protect the health of friends and family. Defying the measures and requiring police intervention does not equal “a show of resistance or machismo,” he added.

As an example of the virus’s infectiousness he cited the case of a single person infecting another nine at a military hospital in the Athens area. Greece has avoided going through the tragedy of a high number of deaths from Covid-19, he underlined, thanks to orderly moves.

“We achieved our goal, we created a line of defense, let’s not make the mistake of believing we have won the battle,” he pointed out.