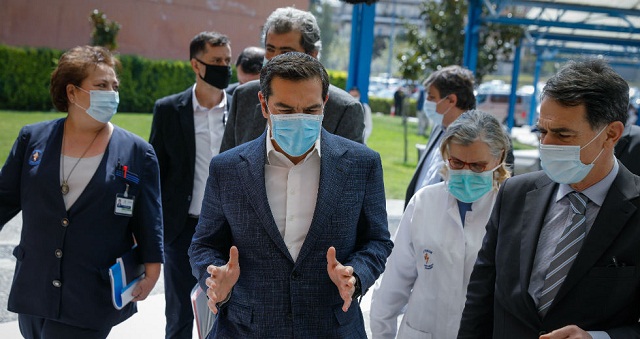 Prime Minister Kyriakos Mitsotakis “shows an odious lack of empathy for what Greek citizens go through,” main opposition SYRIZA leader Alexis Tsipras said on Thursday, in his address to the plenary of Parliament.

Tsipras spoke in particular of a recent excursion by Mitsotakis and his spouse in Parnitha mountain with bikes and called him out for “breaking quarantine and restrictive measures and having fun with citizen he came across in Parnitha” while regular citizens get stiff fines for violating restriction measures. “You are not a government of Athens but of Versailles,” Tsipras said referring to the era of Louis XVI and Marie Antoinette, adding that “such pictures infuriate citizens who are experiencing a unique authoritarianism.”

The main opposition leader said moreover that the government would not accept responsibility for the confusion over “the parallel records of coronavirus infections, leading to an unprecedented mess, casting in doubt the statistical data scientists were called to rely on.” Instead of admitting the mistake, he charged, “you insist on pretending nothing is amiss, practically telling people, ‘Hold your breath until the vaccine arives’. The only thing you focus on is not spoiling your public image.”

Tsipras insisted that the minutes of the Health Ministry’s experts committee on the novel coronavirus should be released to public scrutiny. Syriza will table a draft amendment to this effect shortly, he said.

Syriza has also tabled a draft amendment to ensure prompt payment of overtime for doctors in the National Health System as of July 1, and for the suspension of the 9 percent ceiling on additional medical duty, to be effective as of today to end-March 2021, that would allow for a better response to emergency cases, Tsipras stressed.

Tsipras also demanded that electricity, water, heat or telephone services be reinstituted in segments of the population that have been hardest hit by the coronavirus pandemic and lost access to these services.