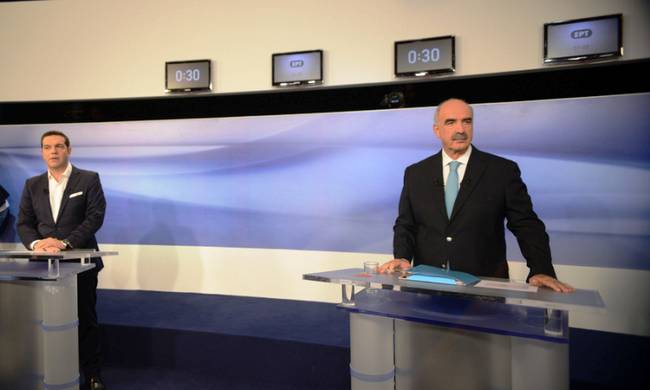 Six days before Greeks go to the second round of elections this year, the two key players in the race – SYRIZA leader Alexis Tsipras and conservative New Democracy chief Evangelos Meimarakis – went head-to-head in a live televised debate on Monday, clashing on issues ranging from corruption to the best way of securing debt relief.

In a lively, and often tense, debate that lasted several hours, Tsipras and Meimarakis sought to convince thousands of undecided voters that their party is more capable than the other to lead Greece’s next government.

Tsipras expressed his certainty that Greece will have a government the day after the elections adding that a single-party majority is achievable, while Meimarakis said Greek voters want parties to cooperate and form a “national team” that will plan a way forward for the country.

Tsipras noted, however, that he will respect the result of the elections and will try to create the conditions for the formation of a new government, but not by accepting a coalition with New Democracy.

“There will either be a progressive government or a conservative government,” he said, stressing that there will be an opportunity to cooperate with the Independent Greeks. He also said stability will be secured with the largest possible percentage for SYRIZA.

Asked about pensions and MP privileges, Tsipras said his government had brought to parliament a draft bill, but there wasn’t enough time to vote it. He added however that privilege cannot exist for the political system and this is something on which the two main parties can agree upon without being in a coalition government.

On pension reforms, the leader of SYRIZA said his government gave a “very tough battle” keeping pensions and leaving open the possibility of founding alternatives and avoid a zero deficit clause. He described the issue as a “time bomb” citing the coalition government of ND and PASOK who removed 25 billion euros from pension funds.

“We have a plan for reforms which will protect the weak,” he said adding that there must not be a different treatment between the people and their representatives, recalling that he ordered a bill that removes a series of privileges of political personnel.

On his side, Meimarakis said Greek voters want parties to cooperate and form a “national team” that will plan a way forward for the country. “If we have a common course we can cooperate because Greeks demand a national team; Greeks want us to cooperate, to forge a new plan on how the country will be governed; a national negotiating team,” he said in reply to a journalist’s question on whether they will cooperate with SYRIZA after the elections.

The leader of New Democracy admitted that there are many capable and worthy officials from different political sides whom he intends to use, if elected, which could include members of the caretaker government and the previous government of Tsipras.

Asked by Tsipras to respond on accusations that ND has not tackled corruption, Meimarakis said: “The country went ahead, mistakes were made, but let’s not tear down everything. We cannot have lessons on corruption from people who didn’t bring a single law [against corruption] to parliament.” He continued to present measures brought by ND to fight corruption and tax evasion.
“What did Mr. Tsipras do for six months? The only thing he did was to abolish Diavgia. Why didn’t he pass the law on media licenses? He wanted to blackmail,” he added.

Responding to a question on the harsh criticism leveled by the leader of the European People’s Party (EPP) in the European Parliament, Manfred Weber, against Greece a few months ago, Meimarakis distanced himself from the comments: “Just because we participate in EPP, it doesn’t mean we all agree between us.”

Commenting on Greece’s debt, he said that there already is a clause on debt restructuring – and not haircut – in the deal signed by the country, “something which Mr. Tsipras doesn’t seem to know.”

Discussing the issue of investments and employment, Meimarakis said his party is ready to unblock all major projects. “We’ll absorb EU funds, we’ll move ahead of major projects; we start work on Monday,” he said, adding that Tsipras has not pushed ahead with anything. “The government of Tsipras sent the message that he doesn’t want businesses to come here.

Talking on layoffs, he said the issue was never raised by the ND government. “”Mr. Tsipras has forgotten that in 2013-2014 we were moving towards growth and that in 2014 the country had a positive GDP. We brought all the investments.”