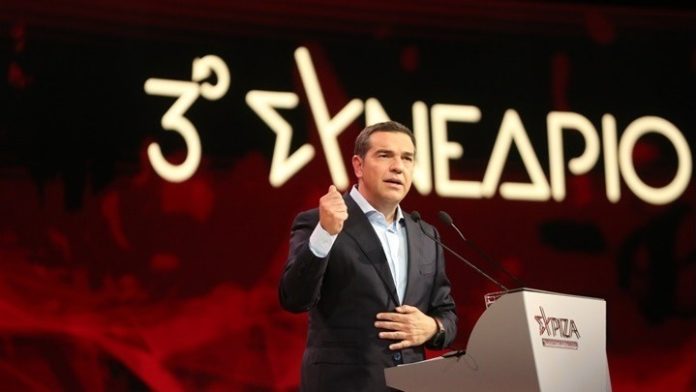 SYRIZA-Progressive Alliance will win the next elections, its leader Alexis Tsipras said at the southern suburb of Faliro on Thursday evening, in the opening speech of the party’s 3rd Congress, which he described as “a leap for political change”.

His basic aim, Tsipras said at the Tae Kwon Do Stadium, was to win the elections, something that “we can achieve together, all progressive forces, from the very first round, bringing a political change and a new start for the country.” At the same time, the main opposition leader issued a strong invitation to all progressive forces to “rule together,” and he explained his commitments for a program of progressive rule. “Let us change first, ourselves, in order to change the country,” he told his audience.

Tsipras spoke of five commitments of what he called “a realistic plan for a progressive rule,” that focuses on cost of living, jobs, small and medium-sized enterprises (SMEs), social protection and youth, and a change in the production model.

1. A drop by 50% of all price hikes since the start of the energy crisis, from the very start of the progressive government’s rule, a rise in minimum salary to 800 euros, and a change in the status of Public Power Corporation to a state utility.

2. A revocation of all job regulations cancelled by the government of Prime Minister Kyriakos Mitsotakis on layoffs, work schedules, collective work agreements, negotiations, and the gradual introduction of a 35-hour week without a drop in wages, among others.

3. Support of SMEs and farmers with immediate resolution of the debts incurred during the pandemic, and activation of strong funding programs of the Development Bank for SMEs and farmers, especially for microloan programs.

4. Expansion of health services for all, including pensioners, under a new national health system, with additional primary care facilities from 127 at present to 380 nationally. In addition, an additional pension payout (the so-called 13th month) for pensioners that will cover supplementary insurance.

5. A holistic plan for public education that will enhance primary and secondary education, with hiring of teachers and professors, and a simplified access to university-level education. Also, support for young people who wish to live on their own, especially for young couples during the first years of their marriage.

“These are the five immediate and basic commitments that will be legislated,” he said, “and will begin to bear fruit the first 100 days of the progressive rule.”

Russia and NATO
Referring to international events, Tsipras said that the Russian invasion of Ukraine highlighted the threat of nuclear war. “We are all expressing in every way our solidarity and support to the Ukrainian people and their trials […] The greatest responsibility for this tragedy clearly belongs to the attacker, Putin’s Russia that violates every meaning of international law,” Tsipras said, adding however that the United States and the EU were also responsible, as they “expanded NATO without building an indivisible frame of security with Russia, as had been agreed in 1999, violating international law with their interventions and not doing what they could to avert war.”

As the neoliberal promises of globalization are collapsing, humanity is before the dilemma of “Socialism or barbarity”, Tsipras said, and called Mitsotakis’ government “perhaps the most extreme neoliberal version of the European right.” Greece is experiencing the harshest aspects of neoliberal brutality, he said, and the price hikes have led millions of households and tens of thousands of businesses to economic impasse.

Prespes
The main opposition leader said that the party “has learned from the difficulties and from our mistakes” and blamed some of the measures it was forced to take to “the threats and constant blackmailing by the troika” of lenders. He said the party knows “there can be no just development with an unequal burden on entrepreneurship and the middle class, but we had no other choice at the time than to free the country from its bonds – that was the priority.”

Tsipras said he was proud of his government’s achievement of bringing the country out of the memorandums while still holding society together and leaving behind full state reserves, unlike the previous government.

The Prespes Agreement “provided a European perspective to a region with dangerous accumulations of tensions,” Tsipras said, while Zoran Zaev, former prime minister of North Macedonia who attended the congress rose to the applause of the participants.

Concluding his address, Tsipras called on party members to “open the party to society without fear and prejudice, to incorporate into the party the people who support us politically and through their votes,” whether new or old, and to support the charter changes proposed in order to make the motto “democracy in rule” a reality. All members of the party should have the right to vote directly for the president and central committee, he stressed, directly, with equal rights in decision making.