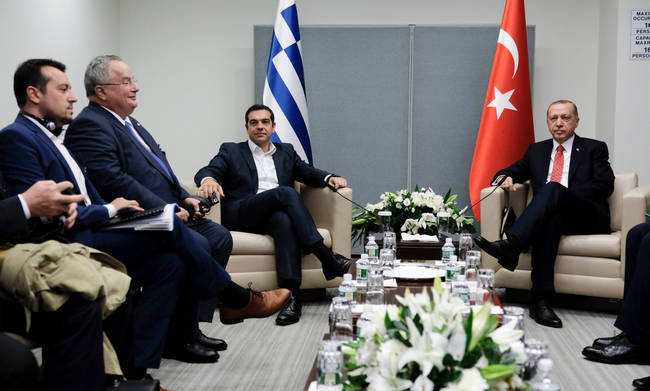 Government sources said on Tuesday that prospects for an improvement in Greek-Turkish relations were evident after Prime Minister Alexis Tsipras and Turkish President Recep Tayyip Erdogan met in New York.

The two men, who met for an hour on the sidelines of the 73rd United Nations General Assembly, reportedly broached a wide range of issues, including the Cyprus problem, migration and Turkey’s relations with the European Union. Erdogan extended an invitation to Tsipras to visit Istanbul for a working meeting, but no date was set.

They reportedly agreed that there must be a reduction in tensions in the region, that direct and constant contact is needed between the two sides on all levels and that confidence building measures must be re-enacted.

The possibility of launching a sea link between Thessaloniki and Izmir was also discussed with both agreeing that it should be ready by next summer, if possible.

Moreover, the two leaders discussed strengthening cooperation on security matters while Tsipras emphasized the need to stem the flow of migrants from the neighboring country – which could be achieved through the full implementation of the EU-Turkey migrant deal.

With regard to the Cyprus problem, the two sides agreed that reunification talks must resume, but there appeared to be a difference in interpretation of the framework set by UN chief Antonio Guterres at the Swiss resort of Crans-Montana where talks between the two sides broke down acrimoniously last year.