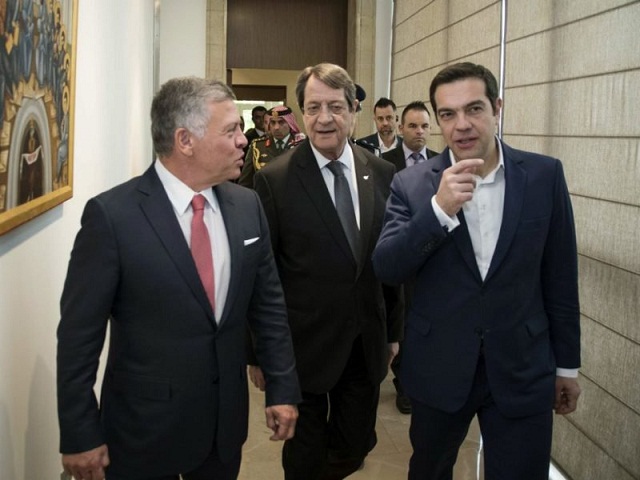 The first trilateral summit of Greece, Cyprus and Jordan establishes the role of the three countries as pillars of stability, peace and security in the region, Greek Prime Minister Alexis Tsipras said on Tuesday during joint statements with Cyprus President Nicos Anastasiades and King Abdullah II of Jordan, after the conclusion of the summit.

“I consider this initiative to be of great importance at a time when we are faced with major challenges, but also when important opportunities are emerging in our region, the Eastern Mediterranean. Our trilateral cooperation is based on firm foundations. Firstly, because our countries have important historical, cultural and economic ties with Jordan, ties of friendship between our peoples, on which we will work. And second, because we have established our position as a pillar of stability, peace and security in the region,” Tsipras underlined.

The Greek premier also stressed the need for the international community to actively and effectively support the countries hosting large numbers of refugees and bearing the burden of meeting so many humanitarian needs.

Jordan, he pointed out, is currently hosting 1,500,000 refugees while Greece and Cyprus have a large burden of refugee flows across Europe.

Tsipras called for a fair and viable solution for the Cyprus problem must be reached, which is based on UN treaties and the Cyprus Republic’s capacity as member of the European Union, without guarantees and occupation troops. He noted that Turkey must confirm that it is truly committed to a peaceful resolution of the issue within the framework and parameters set by the United Nations.

The Greece-Cyprus-Jordan trilateral summit reaffirms the excellent relations and friendship of the three countries and lays the foundations for regional cooperation that they aspire will bring tangible results that benefits all three peoples, Cyprus President Nicos Anastasiades said after their meeting.

The joint declaration after the meeting must reflect the view that cooperation can contribute to stability, security and prosperity in the wider area, Anastasiades said. “The agreements to be signed today are an important first step in our common course. Among the most important challenges is the fight against terrorism,” the Cypriot President noted.

He welcomed an initiative by Jordan’s King Abdullah II against terrorism and expressed Nicosia’s support for the efforts of the international community to revive the negotiating process for the Middle East.

On the refugee crisis, Anastasiades pledged continued assistance to Jordan in the context of the EU, while thanking King Abdullah II and the Greek prime minister for their support in connection with the Cyprus issue and the efforts made by the Republic of Cyprus to find a mutually acceptable solution on the basis of UN resolutions and EU principles and values.

“This day marks what we hope will become a permanent trilateral partnership that will benefit our peoples and the wider region,” King Abdullah II of Jordan stated in the joint press conference.

“The agreements that we sign today will help us to go even further,” King Abdullah II said.

He expressed support for Cyprus’ effort to reach a viable solution for the Cyprus issue that is based on UN resolutions while noting that there cannot be peace in the Middle East if the issue of Palestine was not resolved fairly, including the problem regarding Jerusalem.

He stressed the need to adhere to UN resolutions that ensure the sustainability of an independent Palestinian state and the co-existence of Palestinians and Israelis in Jerusalem. “We must safeguard the peaceful co-existence of Christians and Muslims and the status quo in the Holy Land,” he said.

The three countries also expressed their commitment to the battle against terrorism.

Concluding, King Abdullah said: “we support the efforts regarding the management of the refugee issue and we assume our responsibilities before the world; on your part, you must help to highlight problems and challenges that Jordan faces at the EU”.