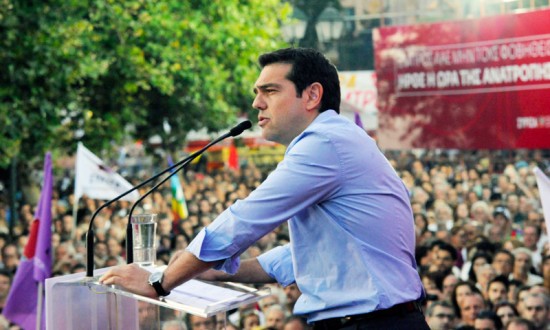 Greeks will not allow the old establishment to return to power, SYRIZA leader Alexis Tsipras said during a speech in the municipality of Aegaleo, in western Attica, adding that his party requests a clear mandate from the people.

“Greece is not turning back … On September 20 we discard the old and we win the new day,” he told supporters. “They won’t bend us and we won’t let them materialize their plans for a ‘left interlude’. We have new battles ahead of us, new challenges, new fights,” the former prime minister said.

“We ask for a clear and strong mandate to get rid of yesterday and start the long march to win the future,” he noted, adding that his aim is to “tear the country away from the mud”.
“We won’t let the old establishment which the people kicked out in January return from the window.”

Responding to main opposition leader Vangelis Meimarakis who, he claimed, is trying to convince SYRIZA to form a coalition government with New Democracy, Tsipras said: “No way,” and noted that he would not participate in a “zombie coalition”.

“Let them find someone else to do it,” he said.