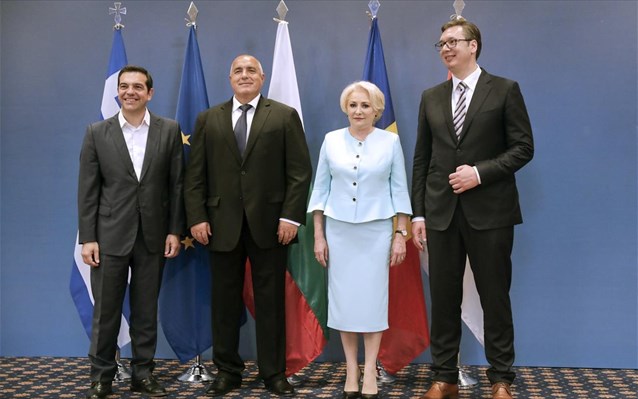 The Balkans is emerging as an energy hub that “redraws the energy map,” Prime Minister Alexis Tsipras said during a press conference on Friday following the quadrilateral meeting of Greece, Romania, Bulgaria and Serbia at Snagov Palace in Romania.

Tsipras said that the four leaders attending the meeting focused on building economic and energy alliances among their countries, and he referred to important interconnection projects among the Mediterranean, Aegean and Black Seas.

He also referred to the IGB pipeline connecting the Trans Adriatic Pipeline which already transports Azerbaijani gas from Northern Greece to the rest of Europe, but will draw new capabilities from the re-installation of liquefied gas (LNG) platform in Alexandroupolis and the existing infrastructure in Revythousa, in the Saronic Gulf outside Athens.

Moreover, Tsipras hailed the “historic agreement” between Greece, Cyprus and Israel on the East Med pipeline “that changes the energy map of the Mediterranean and Eastern Europe as it shapes new possibilities for diversification of energy sources.”

He pointed out how this pipeline would transport natural gas from Israel and Cyprus to Greece through Crete and Central Greece and from there to Italy, “but could potentially be used to the Balkans as well,” added Tsipras.

The Greek Primer said that within the EastMed context, “we have a framework with East Med, an energy grid that makes all countries as well as the Balkans a particularly important regionan energy hub,” with important projects as energy pillars, these are the LNG transport projects in Revythoussa and Alexandroupoli and IGB, namely the vertical pipeline from Greece to Bulgaria as well as the IBS interconnector pipeline between Bulgaria and Serbia.