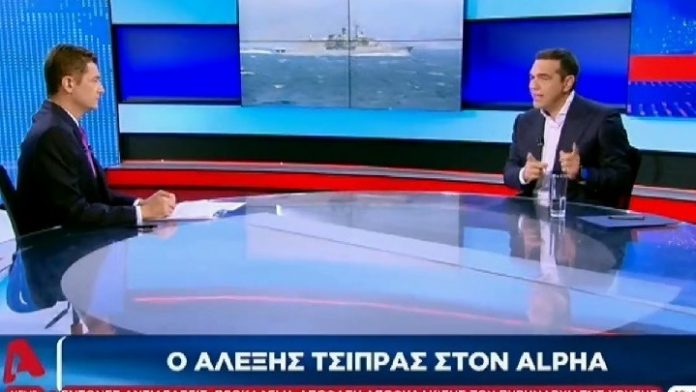 SYRIZA leader Alexis Tsipras unleashed an attack against Prime Minister Kyriakos Mitsotakis for his handling of the pandemic, Greek-Turkish relations, the recent defense agreement signed with France, and high consumer prices, in an interview to Antonis Sroiter and the evening news bulletion on Tuesday.

“The government has not realized what is coming, or how the majority of citizens manage. One in three households cannot make ends meet. Power bill price increases have reached record levels in the EU. The average citizen faces a wave of price rises with stagnant wages,” Tsipras said, adding that at the Thessaloniki International Fair Mitsotakis “promised 150 million euros to help households, and two weeks later they had to revoke it.” Meanwhile, the government refuses to reduce the special consumer tax, the main opposition leader said, which would help. “Mr. Mitsotakis persists in policies that destroy social cohesion,” he said.

Speaking of the National Health System (ESY), Tsipras said that infections and deaths would have been lower. “If there were true support of ESY and a serious vaccination program with a citizens’ campaign, we would not be at this sorry state,” he said, and expressed his concern about the number of deaths from Covid-19. “I see the government however exude a sense of relaxation and […] large numbers of unvaccinated people at critical ages,” he noted, charging that Mitsotakis’ entire strategy for the pandemic “is based on petty political interests,” he claimed.

In terms of the Greek-French defense agreement, the main opposition leader said that his party also pursued such an agreement, but not under such imbalanced terms. “We provide 7 billion euros and it does not provide support if we are attacked, since the Turkish threat is not on the ground but in the EEZ and the continental shelf. What we said is we want an official confirmation that if sovereign rights are threatened, France will stand by us. Instead, we got an agreement that does not contain sovereign rights. What does this mean? That if Turkish research ships come close to 7 miles, eg on the borders of the EEZ with Egypt, France will not help if we have challenges?”

Asked if he thought that Mitsotakis would call snap elections, despite his assertion he will not, Tsipras responded, “Since I have served as a prime minister I can tell you that a prime minister calls elections for two reasons – either because he is absolutely sure that he will win them, or because he foresees his government’s collapse and wants to get ahead of it. I think we are seeing the latter case.”

In terms of the upcoming elections at Movement for Change (KINAL) for a new party leader now that current leader Fofi Gennimata has withdrawn from the race for serious health reasons, he said that “the only thing I can say is the hope that the day after the election there is a prospect of a progressive government.”