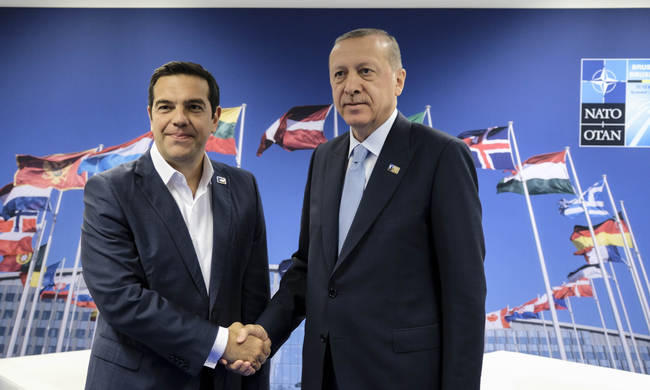 Prime Minister Alexis Tsipras said that he raised the issue of Turkish escalation of tension in the Aegean Sea and of the two Greek servicemen who are being held in Edirne without trial, at his meeting with Turkish President Recep Tayyip Erdogan on Thursday, scheduled on the sidelines of the NATO Summit meetings.

At a press conference, Tsipras said the nearly two-hour meeting with the Turkish president was not an easy meeting, because of those two issues, but he said that the case of the two officers was “a major issue of ethical, symbolic and substantive meaning in the relations between the two countries.”

Erdogan, he said, brought up in response the issue of the eight Turkish servicemen who had fled to Greece after a coup, and whose extradition the Turkish government has asked for. (The eight are awaiting the completion of asylum procedures and the issuing of travel documents.)

Greece does not welcome individuals who have participated in coups, but Greek justice is independent, Tsipras said he told Erdogan, adding that in terms of the two Greeks, held for entering Turkey during a patrol, “I was not asking (Erdogan) for a favor, I said that the necessary processes must go ahead.”

According to the premier, the two leaders also decided to work towards reducing tension in the Aegean and welcomed the collaboration on migration.