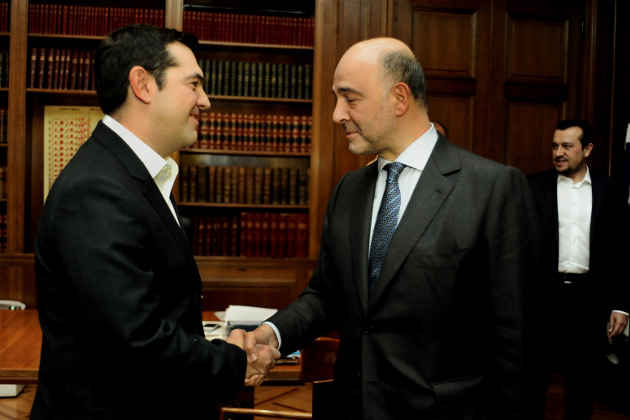 The summer of 2018 will be a milestone for Greece as the country is preparing to exit its adjustment program, Prime Minister Alexis Tsipras said on Thursday as he welcomed European Commissioner for Economic and Financial Affairs Pierre Moscovici to Maximos Mansion.

“Now is the time to prepare our steps carefully because next summer will be a historic milestone for Greece. After eight years, I think it is time to make plans and organize the next day. Today we had good news from the markets today, because exchanges are going very well. There is huge demand from investors, and this shows that we are in a very good track,” he said.

On his side, Moscovici expressed optimism about Greece’s prospects. “I come here with a feeling of confidence and hope. I’m confident because I see that now the Greek economy clearly is in recovery. I delivered the figures yesterday for growth; 1.6 pct for 2017 and 2.5 pct for the next two years. I see that the return to the markets is no track, despite market turbulences,” he said.

“And it is also a message of hope because I am sure now that we can move towards a successful conclusion of the program in the summer and a future which will be Greek-owned,” he added, noting that the future will be in Greece’s hands.

Exiting later from his meeting with Tsipras, the Commissioner said the two sides can work for a successful completion of the program in the summer by implementing the last measures of the third review and preparing the fourth.

He said if all these things are completed by June 21, when the Eurogroup is scheduled to meet in Luxembourg, then the institutions will be able to say that they are heading towards the end of the program. If this is the case, the institutions will have to come up with a comprehensive deal on debt and post-bailout supervision.

Moscovici said the issues that have to be discussed are the medium-term measures for Greece’s massive debt – that is, find the mechanism that will be used – and the issue of the type of supervision after the program expires.

He also urged the government to prepare the growth program that the country will follow after its exit from strict supervision, saying it must be completed in the coming months, adding the aim is for Greece to restore its place in the Eurozone with its full rights and obligations and a strategy to create jobs.