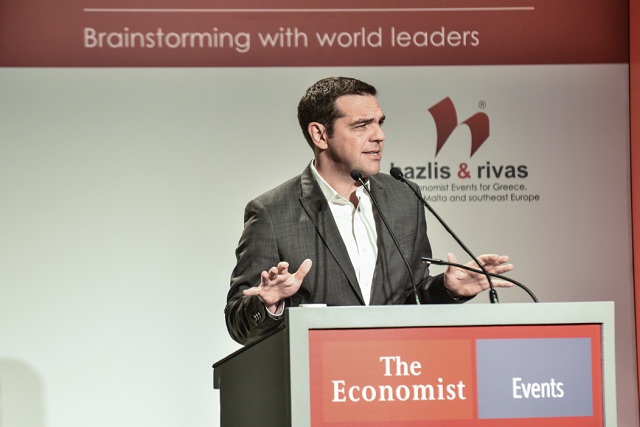 Greece will make a “clean” exit from its adjustment program in 2018 and will not need a credit line, Prime Minister Alexis Tsipras said in a speech on Thursday, addressing an Economist Conference held in a hotel in southern Athens.

“Greece will not foray into the markets protected, for publicity reasons. [Greece] will have earned it and [will do it] in conditions of sustainability. This is why Greece will not seek in the summer of 2018 a credit line of support with new commitments, that is, a disguised memorandum to leave the program. But after the decision on June 15, we are certain it will make a ‘clean’ exit to the markets and finally bid farewell to the memorandums,” he said.

Tsipras noted the country has high-quality products, networks, infrastructure, know-how and, above all, a human potential with knowledge and skills.

“For this reason, our commitment is primarily to reforms that will make the most of the above competitive advantages, to create new jobs, with stable labour relationships and decent wages,” he explained, and reiterated his vision for fair growth that has a positive impact on the entire society.

Presenting the country’s path after the last Eurogroup earlier this month, he said the the country will soon exit the program and leave recesion behind.

“The skein has been untangled and Greece is gradually, truly leaving behind years of recession, while shaping the conditions to exit the aid programs, exit from supervision, with its own plan for a new Greece – more productive and fairer,” he said and cited the economy’s over-performance on its fiscal targets as the key to recovering the country’s credibility and a solid basis for the next crucial steps.

Tsipras said the government made this possible without repeating the “aggressive fiscal adjustment” that was implemented in the period 2010-2014 which proved to be catastrophic for the economy and Greek society.

“It cannot be a viable option for Greece to have a program for growth that includes shrinking of wages, full deregulation of the labor market and elimination of all forms of social protection,” he said, noting that the country has all the necessary conditions to become a knowledge- and capital-intensive economy.

He stressed that unemployment is Greece’s “great nightmare” although the rate has lowered in the past two years, with the job balance being positive by 250,000 jobs. To tackle it, the country needs investments, adding there’s intense interest from abroad and investors are “ready to return’ to Greece.

He said interest by investors focuses on energy and renewable sources, transport and transit trade, the primary sector and the manufacturing industry, tourism, Greece’s research centers and the specialized human capital.

Tsipras then urged business people to invest in Greece, “Now, not in the future.”

“Investors should take advantage of the opportunities it offers. [They] should invest and support our great effort. Because if we are constantly waiting for the future, then we risk losing the present. And our present shows us that the country’s path will for now on be upward,” he said, and reiterated his government’s commitment to implement the program “without delays and unnecessary ambivalences”.