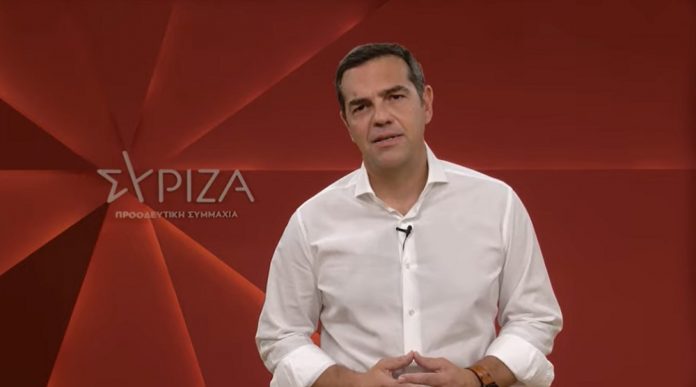 Expressing confidence that his party will comfortably win the next elections whenever these are held, main opposition SYRIZA-Progressive Alliance leader Alexis Tsipras was harshly critical of the government in an extensive interview with the newspaper “Efimerida ton Syntakton” published on Saturday, saying that people were “tired of the disconnect” between the reality they experience and the picture presented in the media.

Tsipras also slammed the government’s handling of the fires and the pandemic and said the overall political responsibility belonged to the prime minister and asserting that “at the helm of the country is a denier of reality.”

“Society is now suffering under a government that in two years has not only levelled everything but is constantly insulting the intelligence of the citizens with unprecedented propaganda. According to this, whether people are dying outside ICUs, whether unemployment is rocketing, businesses closing or half of Greece is on fire, Mitsotakis is doing everything perfectly. And every time that rage spills over, even on the microphones of live TV reports, an opinion poll appears which shows us how much support for the ruling party has risen in public opinion. At some point, however, the citizens tire of the disconnect between the reality they experience and the images they are bombarded with,” he said.

This visible wear of the government was not enough, however, and SYRIZA must also convince voters that it was ready to undertake a difference type of governance, one based on a radical realism that was not only willing but also able to “give a contemporary content to the need and idea of change,” he added.

Tsipras expressed the opinion that a so-called “anti-SYRIZA front” is on the wane, despite the efforts of the pro-government media to sustain it, whereas an anti-government sentiment was growing stronger and only fuelled by “investment in propaganda while ignoring people’s needs”.

He repeated that SYRIZA-Progressive Alliance will strive for unity with the other progressive forces in the country and the wager was for the Left to lead the way not only with ideas but with actions from a position of responsibility, which improve people’s lives and give “space for social justice and contribute to stopping the climate crisis.”

Tsipras also accused the government of failing to learn from its mistakes in the handling of the destructive wildfires: “Mr. Mitsotakis, after the greatest environmental catastrophe in the history of the country, said that everything had gone well and that he did not see any mistakes. Consequently, not only do I not see a desire for changes but not even a basic sense of responsibility toward those that saw the place they live and their property turned to ash.”

He accused the prime minister of binning a largely complete plan for the protection of forests and reorganisation of civil defence left by SYRIZA, based on the Goldammer report that the prime minister had also approved, in order to reinstate partisan officials at the helm of a problematic and already failed state mechanism. He also accused the government of promoting all the individuals that had been dismissed as responsible for the disaster in Mati, without providing any convincing explanation.

Asked why he did not demand the resignation of those responsible, Tsipras said the replacement of a failed minister by another was pointless when the failed policies and an organisational structure that was doomed to failure remained intact.
On the pandemic front, he said the government had lost the most important weapon, which was the trust of society, as it was unable to convince anyone and could not unite but only divide.

“It is now up to the people and us, the forces of the opposition, to unite, convince and save what can be saved, especially human lives. With unity and solidarity we will do whatever we can to achieve this,” he said.

In answer to a question, Tsipras said that his party’s intention if elected was not to “Get comfortable in power….but to make less comfortable those that have settled themselves there without having the right. Democracy, justice and transparency everywhere, this is our position, from which we will not retreat.”